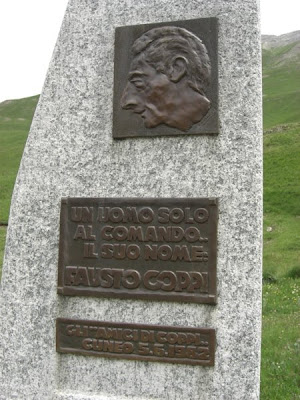 "The Giro is back in Italy, after three opening days in The Netherlands. From a Dutch perspective it was a huge success and the peloton made the cities and villages turn into pink. Unfortunately there were some crashes too, caused by some narrow roads on the route, but that was in most cases a deliberate choice of the organizers of the Giro, who preferred to show nice TV-pictures rather than giving priority to the safety of the riders. On the other hand, the charm of cycling is riding on scenic routes. Grand Tours are not held on a closed circuit, and if it would be for pure speed the Giro could better be held in the motodrome of Monza.

The Giro being so close at home inspired me to do some reading. I did read 'Dino Buzzatti al Giro d'Italia', again, and the article by Curzio Malaparte 'Les deux visages d'Italie. Coppi et Bartali' with a comment by Jacques Augendre. Both publications referred to the Giro of 1949 and one of the highlights of that Giro was the famous stage from Cuneo to Pinerolo. And since the Giro visited Cuneo today again, attention is automatically drawn towards the exploit of Fausto Coppi, sixty-one years before. There were five climbs to take: Maddalena, Vars, Izoard, Monginevro and Sestrière. It's rainy and the clouds are hanging low in the Valle Stura. In the neighborhood of Argentera Coppi counters an attack of Primo Volpi and decides to start an impressive solo of 190 kilometers, arriving in Pinerolo twelve minutes before his competitors.

This impressive victory is commemorated by a statue on the top of the Colle della Maddalena. A bronze plaque is showing the head of Coppi and the text 'Un uomo solo al comando. Il suo nome: Fausto Coppi'. The words are from Mario Ferretti, the radio commentator giving his report from this decisive stage, who also added 'la sua maglia é bianco-celeste'.

With respect to this, I would like to ask for some help from cycling fans in Italy. I have just found out that some other monuments do exist, because of this historic stage. In Argentera, a plaque was inaugurated on May 18, 2009, near the place where Coppi started his solo ride. Also in Pinerolo (al campo sportivo Barbieri) a commemorative plaque has been placed in 2006.

If someone could send me some good digital pictures, I would highly appreciate it!"

(ed. note: if you have photos of the two plaques referred to by Jac please email them to me at the address below and I will forward them.

Stories for the Italian Cycling Journal about rides, granfondos, having a good time cycling in Italy, Italian cycling history, etc. are very welcome. Contact me at veronaman@gmail.com. There are more than 1,300 stories in this blog. The search feature to the right works best for finding subjects in the blog and there is also a translate button at the bottom so you can translate each page.
Posted by Angelo senza la o at 4:50 PM