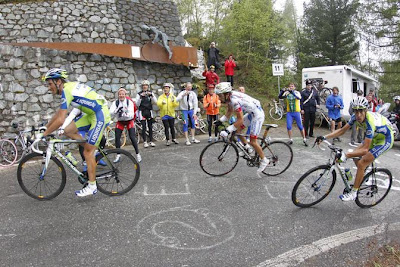 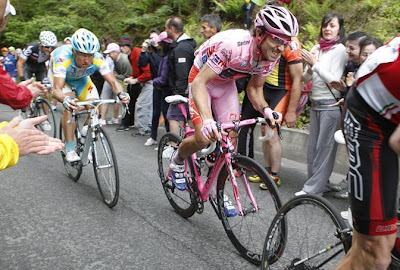 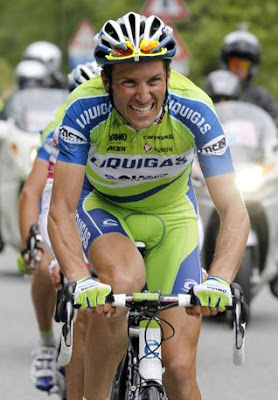 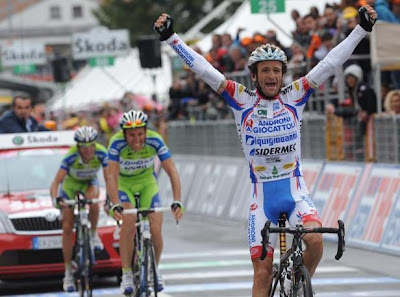 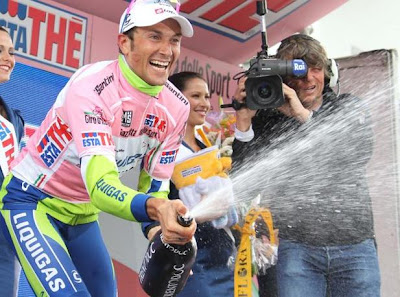 Aprica, 28 May: Scarponi wins the Aprica stage. Basso the new pink jersey. The upheaval in the GC as reported by the Gazzetta dello Sport:

The spectacular Brescia-Aprica, the first of the two great mountain stages, revolutionizes the top of the general classification of the Giro d'Italia. Ivan Basso clearly won his duel with Cadel Evans, but he has his work cut out for him to beat the resistance of a very courageous racer like David Arroyo who fights all alone like a lion to hang on to his pink jersey. But his effort is in vain: Michele Scarponi wins the stage ahead of Nibali and Basso, who is now the new leader of the general classification.

The stage starts off without yesterday's leaders Greipel and Dean. And without Hondo as well. With two terrible mountain stages ahead the three sprinters have nothing more to gain from this Giro. The race livens up quite a bit before the real climbs. At the 46th kilometer, a small platoon of racers take off: Bakelandts, Failli, Samoilau, Mazzanti, Krivtsov, Rodriguez, Bonnet, Tondo and Duque race away and gain a maximum lead of 8'54". Along the climb towards Aprica, Liquigas gets up front and pulls. The lead that the fugitives have drops and at the first KoM it's at 5'05". Meanwhile, the group of pace setters crumbles and only four manage to stay up front: Duque, Failli, Rodriguez and Samoilau. During the day's second climb - Trivigno - Stefano Garzelli spurts forward and breaks off from the pink jersey pack. The Varese native snags and passes Bonnet, Krivtsov e Mazzanti while Failli lets the little platoon up front go by to wait for his captain and give him a hand.

At the beginning of the Mortirolo climb Failli and Garzelli catch up with Rodriguez, Duque and Samoilau and they take command of the race. In the pink jersey platoon, Liquigas picks up the pace and the pack falls away before the first turns: Porte and Cunego have a hard time right away and in the toughest part Arroyo gives in as well. Basso and Nibali are forcing and Sastre, Vinokourov and Evans are left behind. Scarponi is the only one keeping the pace of the two Liquigas men who catch up with Garzelli 38 kilometers from the finish line and take command. On the peak of Mortirolo the trio has a lead of 55" on Vinokourov, 1'43" on Evans and 1'55" on Arroyo. The Spaniard swoops downhill, revealing surprising talent, and within a handful of kilometers recovers 25" on Basso, catches up with Evans, Sastre and Vinokourov. 20 kilometres from the finish line, the trio's lead on him is only 40".

In the portion on level land Arroyo waits for Sastre, Gadet and Evans, but collaboration is scanty. The quartet does not help the Spaniard and his delay is now over a minute. Up front, Basso starts seeing the pink jersey and gives it all he's got while Arroyo's chances dwindle kilometer after kilometer. Michele Scarponi, who has saved a little extra energy, beats Basso and Nibali on a dash. Arroyo crosses with 3'07" delay and loses his pink jersey. Basso is now at the top of the general classification with 51" on Arroyo, 2'30" on Nibali, 2'49" on Scarponi and 4'00" on Evans.

"The race tactic was to stick together, our strength is in this,", said Basso. "We preferred to join forces and it paid off. We already knew that the last part would have been really rough, we gave it all we had on those final 15 kilometres. And if we made it to the finish line, it's because of Vincenzo and Scarponi, a loyal breakaway companion all the way. Today's pink jersey is a nice event, but the most important one is the one they award on Sunday at 6:00 p.m."

Doubts about weather conditions at Gavia have been put aside and tomorrow's massive stage is the one (originally) planned: 178 km from Bormio to Ponte di Legno (Passo del Tonale) with KoMs at Forcola di Livigno, the Iera Pass, the Foscagno Pass and the 2,618 metres at the Gavia Pass, this Giro's "Cima Coppi" (highest peak in Giro). Then, after an extremely technical downhill, the final climb towards Tonale where the stage will conclude. The stage will have approximately 20,000 feet of climbing.

Note: as I write this there are a number of issues related to weather (snow!) and landslides that can impact the route for tomorrow. A final decision regarding route changes will be made tomorrow morning at 10:30 a.m., two hours before the start of the stage. Below is the stage as originally planned. 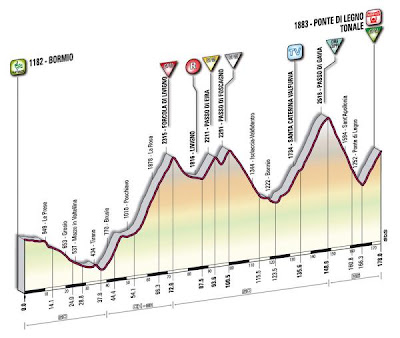 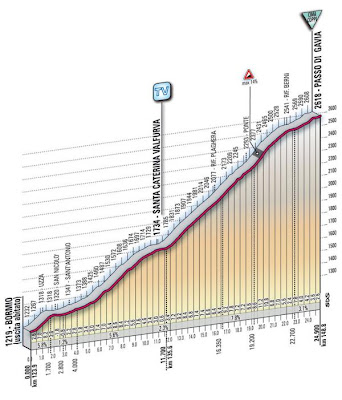 Stories for the Italian Cycling Journal about rides, granfondos, racing, having a good time cycling in Italy, Italian cycling history, etc. are very welcome. Contact me at veronaman@gmail.com. There are more than 1,400 stories in this blog. The search feature to the right works best for finding subjects in the blog and there is also a translate button at the bottom so you can translate each page.
Posted by Angelo senza la o at 4:25 PM