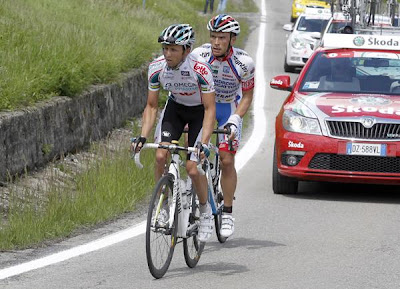 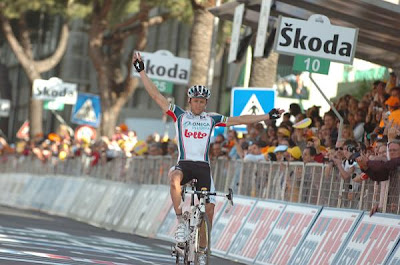 Marina di Carrara, 14 May: For the second consecutive day the sprinters were foiled. Yesterday the sprinters missed their chance for a stage win due to the efforts of Japan's Arashiro. Today, it was the turn of an Australian domestique, Mattie Lloyd (Omega Pharma-Lotto) to put in a heroic ride. Lloyd, wearing the Australian champion green & gold bands on his collar & cuffs, was in a two man breakaway of 128 km with Swiss rider Rubens Bertogliati (Androni Giocattoli). On the ultimate climb Lloyd gained a few seconds on his breakaway companion and soloed 12 km to the finish line. Bertogliati came in second, just barely holding off the bunch sprint which was won by Danilo Hondo (Lampre-Farnese Vini).

"In the last two kilometres today, I didn't see anything," said Lloyd. "I was just looking at the red cars in front of me. Then, with 200 metres to go, I felt something special because the Giro is such an emotional race for me. It’s romantic. This race is more difficult than any other. Maybe it’s just the characteristics of today’s stage that made me a winner. It wouldn't have happened if I didn't do that move. Ninety-nine percent of the time this kind of move fails. I realized that my breakaway companion Rubens Bertogliati was creeping in the hills at the end. I'm normally at my ease when it goes uphill. I can't descend, well I can sometimes, but I can climb."

Nibali, Basso, and Agnoli, all of Liquigas-Doimo, retained their top 3 positions.

Stories for the Italian Cycling Journal about rides, granfondos, having a good time cycling in Italy, Italian cycling history, etc. are very welcome. Contact me at veronaman@gmail.com. There are more than 1,300 stories in this blog. The search feature to the right works best for finding subjects in the blog and there is also a translate button at the bottom so you can translate each page.
Posted by Angelo senza la o at 12:19 PM