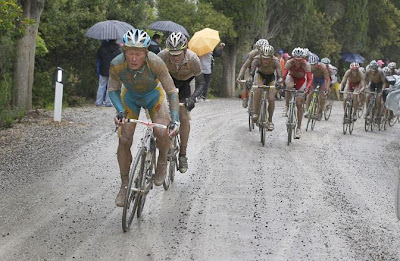 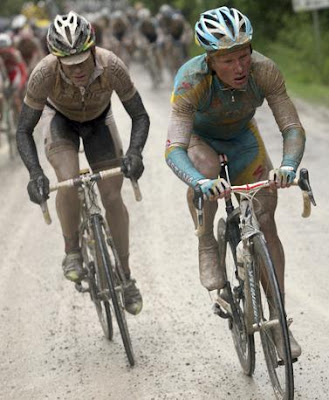 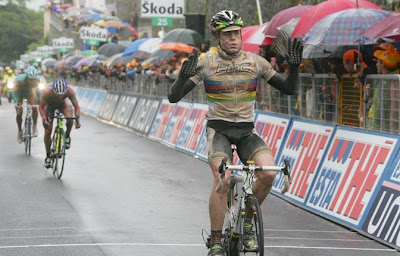 Montalcino, 15 May: An epic day in which the pink jersey returned to Alexandre Vinokourov. The Gazzetta dello Sport reports it like this:

Evans triumphs in the mud, Vinokourov is back in the pink jersey

Rain, fog, wind and mud
A stage that evokes the days gone by shakes up the Giro's classification. On the dirt roads in the province of Siena along the Carrara-Montalcino, Cadel Evans outsprints an excellent Damiano Cunego and Alexandre Vinokourov. Nibali, delayed by his fall, loses 2'01" and hands the pink jersey over to Astana's Kazakh racer.

A brisk start
The pack gets to a fast start in Carrara and after 40 kilometres, along the Versilia coastline, it hits an average speed of 52 km/h. When the race heads inland (province of Pisa), a 16 racer platoon opens up: among them, white jersey Agnoli, Japanese Arashiro, Modolo, Simoni and Stangelj. The break up does not last long and at the 71st kilometre the pack is compact once again. At the 85th kilometre, Rabobank's Dutch racer Rick Flens and Danish Nicki Sorensen (Saxo Bank) build a lead of 9'25" after almost 40 kilometres of double-breakaway. When the series of ascents and descents begin in the hinterlands of the province of Siena, Katusha gets ahead and pulls the pack, getting the time back from the pacesetters.

A stage evoking the bygone days.
Once escapees have been reached, the pack breaks up again after the crash of a selected group that includes pink jersey Nibali, Sastre and Agnoli. The Messina native is forced to wait for the car team to substitute his bicycle and loses more than a minute. The pack splits up: a 20-man group is ahead featuring Garzelli, Gerdemann, Vinokourov, Evans and Cunego. At the end of the first sector of dirt roads, Nibali (helped by Agnoli) is 1'30" from the escapees. A battle breaks out at the head of the pack. The men fight in impossible circumstances: Cunego tries, followed by Vinokourov and Evans. The escapees are down to seven: aside from these three, there are Garzelli, Gadret, Arroyo and Pinotti. The pink jersey seems to have what it takes to get back into the group, but he waits for his teammate Basso, who is delayed. In the finale, through the narrow alleys of Montalcino, Evans, Cunego and Vinkourov let loose with Aussie world champion who finds right surge to beat them in a final dash. An excellent Pinotti arrives at 6 seconds, Arroyo at 12, Garzelli at 26 and Scarponi at 1'01". Nibali loses 2'01" while Sastre sinks and cuts the finish line after 5'20". The general classification is overturned: Kazakh racer Alexandre Vinokourov gets the pink jersey back with Evans second at 1'12" and Millar third at 1'29". Karpets is at 1'30" and Nibali holds at 1'33".

The men are wearing mud masks and look as if they're emerging from another time in history. As soon as they cross the finish line, they take the paved road to the showers or the team buses for a bit of warmth after five hours of cold and rain. Cadel Evans and Alexandre Vinkourov, Damiano Cunego and Michele Scarponi, Vincenzo Nibali and Ivan Basso. Extraordinary interpreters of a crucial day of the Giro.

Bikers
From one wall to another. From the Freccia-Vallone won in April to the Strade Bianche. Charm and triumph in the rainbow jersey, bring back the old times. "It was an incredible day, all those years on the mountain bike paid off," said Evans, who won his second cross-country world cup eleven years ago. "After Nibali fell, I managed to get back in (alone, Editor's Note) on Vinokourov and Garzelli. The plan was to attack, but I didn't hope that I would wind this stage up so well. I lost alot of time in Holland due to falls and other things that were not my fault. Now, I'm back in the race."

Pain
Without the fall (at -32 kilometres from the finish line), Vincenzo Nibali would have had a chance to reply to the attacks. But, he was forced to chase instead, with pain in his right hip and left wrist. "Scarponi slid right in front of me, I couldn't have avoided him anyway. At first, I couldn't even pedal, then it got a little better. Reacting up on Terminillo (ed.note: the final climb tomorrow)? I have to get back in shape first, then I'll think about it." Ivan Basso says: "We chose to go together, because recuperating would have been impossible on our own. This was a bad day. Everything is still up in the air for me."

Like a Roubaix
Alexandre Vinokourov really wore himself out on those dirt roads, searching for Evans' collaboration during the last 25 kilometres. He wanted the pink jersey he got in Middelburg back and he got it. "We started off really fast and it started pouring rain after a few kilometres. It was as tough as a Paris-Roubaix, I couldn't see a thing for the last 20, too much mud in my eyes, my front wheel was sliding. It was a great show! But what pain and suffering."

Damiano Cunego, second place, was looking for one of those victories that would be remembered for a long time. He didn't find it. It is hard to find a victory when Evans is in this great shape, but there was definitely a hint. "I baptised Evans' wheel, but this racer is outrageously explosive and when he took off, there really was nothing left to do. Vinokourov and Cadel were clearly better." This version could be confirmed or contradicted tomorrow at Terminillo.

Stories for the Italian Cycling Journal about rides, granfondos, having a good time cycling in Italy, Italian cycling history, etc. are very welcome. Contact me at veronaman@gmail.com. There are more than 1,400 stories in this blog. The search feature to the right works best for finding subjects in the blog and there is also a translate button at the bottom so you can translate each page.
Posted by Angelo senza la o at 6:39 PM