The following article was written by James Huang and appeared in www.cyclingnews.com.

Saturday's torturous run into Montalcino will undoubtedly go down as one of the most memorable moments of the Giro d'Italia with shattered riders crossing the line looking more as if they had just finished Paris-Roubaix, not a stage of a grand tour: minutes were gained and lost, spirits were broken, heroes were made.

But for many Giro d'Italia watchers, stage 7 also harkened back to another brutally unforgiving day 22 years ago – when Andy Hampsten left behind all but one of his competitors ascending a snowy and freezing-cold Passo di Gavia, bravely descended the other side, and then went on to become the first and only American to win Italy's greatest bicycle race.

Hampsten's steed back then was a prototypical road racer of the late '80s with a lugged steel frame and fork, a 1" threaded steerer, and shifters that were mounted on the down tube, not conveniently integrated into the brake levers. But the characteristics he sought from his machine back then aren't far off from what racers still demand today.

Though it wore the red, green and white livery and labels of official team sponsor Huffy, Hampsten's bike was actually a custom made rig crafted to his specifications by famed US builder John Slawta of Land Shark after a team-issued frame broke beneath him earlier that spring at Fleche-Wallone. That failure was eventually sourced back to an errant shipment by the builder's tubing supplier but still, Hampsten says his confidence was shaken and he wanted to go with something tried and true.

"I felt bad about not using a Serotta [the company that actually built the team 'Huffys'] and sticking with the team supplier," Hampsten told us. "It wasn't Serotta's fault. But I was in a period of my life when I didn't like crashing due to mystery bike failures, so I went with the sure ride I knew Land Shark would build for me.

"John gave me a deal on it and the 7-Eleven team was nice enough to let me buy a frame for myself," Hampsten continued. "He made bikes earlier for my Levi's Raleigh team and I knew he would do a great job."

Hampsten's racing experience at that point taught him to seek out a frame that was light – but not too light – and handled with the stability and predictability needed to not only ascend the highest peaks but also get down them safely and quickly as well, too.

"I asked John to build it light for the mountains but it needed to put up with some bad roads," Hampsten said. "It was light but I know John was fairly conservative about going too light. His geometry is perfect; I never felt it would not get me out of the way when I was going around or through a crash, yet on the bad road conditions we experienced it was never unstable.

"The year after '88 we had Eddy Merckx as our bike supplier," he continued. "He is the master at fitting bikes to riders and taught us not to get hung up on light bikes. Why save seconds on a climb and lose minutes on a descent? Slawta certainly has an old world style of making bikes that go up and downhill properly."

Some of the original parts have unfortunately gone in separate directions from the rest of the bike, however, including the Look-style Dura-Ace clipless pedals and the then-prototype eight-speed cassette and rear wheel (all of which, "went to a junior racer with another bike in '89. Who knew bike parts would keep changing?").

Hampsten says his local shop, University Bicycles in Boulder, Colorado (where the bike is now on display amongst the shop's impressive collection of vintage gear) has otherwise done an excellent job of restoring and caring for the bike and aside from a non-spec chain, is just as he raced it in Italy in '88, fit and all.

Total weight as pictured here without pedals is 8.93kg (19.69lb) – heavy by today's standards but typical for its time. 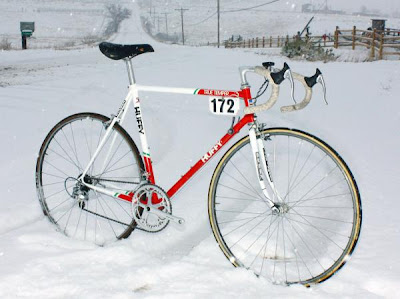 Hampsten tells us he hasn't ridden the bike in years but by his account its handling characteristics and overall feel aren't far off from what he prefers now – though the fit has shortened by nearly two centimeters in both reach and saddle height on account of his now more relaxed demeanor on the bike.

"I haven't ridden one of my old race bikes for a long time, but I don't think they handle any different than what I enjoyed when I was racing," he said. "Now that I am a dedicated café 'tourerererer' my demands are less on the speed of the bike than they are feeling good on my ride. So I want a bike that is light and handles extremely well on descents and switchbacks, especially if I am trying to race rain showers. I want to finish my rides without my body hurting and have the energy to ride more if my (imagined) schedule would allow it.

"As it happens what I demand from my bike now is exactly how Eddy designed bikes," he went on to say. "Make a comfortable ride that lets a racer feel great and full of energy at the end of the race."

Despite offers from collectors, Hampsten says he'll never sell the bike to anyone as it holds too dear a place in his heart and too many fond memories.

"[That bike] is what carried me through the defining moment of my career as a bike racer," he said. "I never thought I would face crazy weather on the crucial stage of what is the biggest race I ever won, so I never prepared for that mentally. I dreamed of being a bike racer for most of my life, and I dealt with winter six months of the year when I was young. So when my moment was met with snow on the Gavia pass I got far enough past my fears to accept that I was in for a hard time, but it was going to be my hard time. I might have been better at being a bike racer than winning bike races, and on this bike I went farther past the "can't dos" in my mind than I have ever imagined possible.

Stories for the Italian Cycling Journal about rides, granfondos, racing, having a good time cycling in Italy, Italian cycling history, etc. are very welcome. Contact me at veronaman@gmail.com. There are more than 1,400 stories in this blog. The search feature to the right works best for finding subjects in the blog and there is also a translate button at the bottom so you can translate each page.
Posted by Angelo senza la o at 6:48 PM