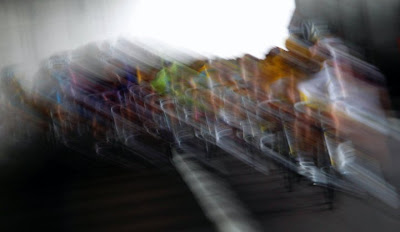 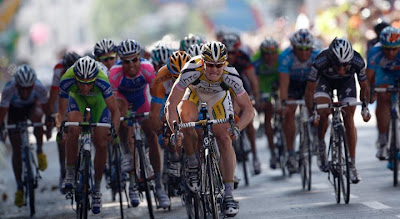 Brescia, 27 May: Today's stage did indeed come down to a sprint and was won by HTC-Columbia German sprinter André Greipel. The flat stage, of 140 kilometers from Levico Terme to Brescia, featured a long breakaway by Alan Marangoni (Colnago) and German Oliver Kaisen (Omega Pharma-Lotto) that began at the 21st kilometer. The peloton caught Kaisen at three km from the finish line and Marangoni at 2km.

The stage did not alter the GC. David Arroyo is still in the pink jersey with a 2'27" lead on Ivan Basso and 2'44" on Richie Porte.

Tomorrow and Saturday's stages are both "monstrous" mountain stages that could decide the Giro. However, at the moment, there is a possibility that the Giro may not go over the Gavia Pass on Saturday as planned due to snow at the summit. That in turn could leave tomorrow as the critical day before heading to the individual time trial in Verona on Sunday. It's worth recollecting that Francesco Moser snatched the pink jersey at the last minute from Frenchman Laurent Fignonwon at the 1984 Giro d'Italia on the last stage....in a time trial...in Verona...also on a May 30th.

Tomorrow's stage from Brescia to Aprica will be 195 km with three KoMs and a final climb. The race goes through Aprica for the first time after 113 kilometers. Then there is a climb to Trivigno followed by a very technical downhill after which there is an extremely steep climb up Mortirolo (almost 13 kilometres with an average incline of 10%). The stage concludes with a final climb towards Aprica, 15 kilometres with a maximum incline of 15%. 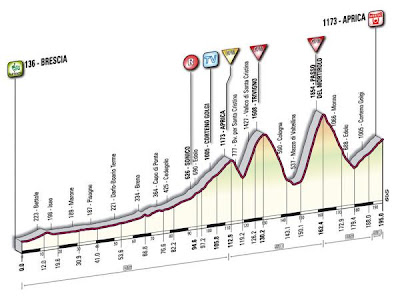 Stories for the Italian Cycling Journal about rides, granfondos, having a good time cycling in Italy, Italian cycling history, etc. are very welcome. Contact me at veronaman@gmail.com. There are more than 1,400 stories in this blog. The search feature to the right works best for finding subjects in the blog and there is also a translate button at the bottom so you can translate each page.
Posted by Angelo senza la o at 6:13 PM