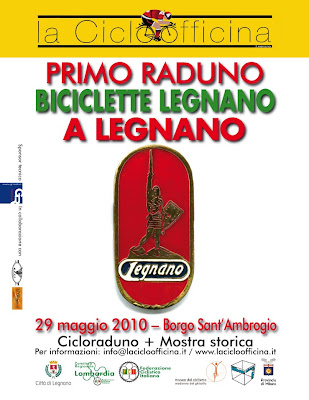 The first Legnano bicycle rally will be held, with the support of Città di Legnano and the Provincia di Milano, on May 29, 2010. Present will be Ercole Baldini, Arnaldo Pambianco, Giorgio Albani, Vittorio Seghezzi, Ettore Milano and Danilo Gioia.

Ercole Baldini won the Giro d'Italia in 1958, and in 1956 won a gold medal in the road race at the Summer Olympics in Melbourne. Also, in 1956 he stripped Jacques Anquetil of the hour record, riding 46.394 km at the Velodromo Vigorelli in Milan.

The following information about Legnano history courtesy of http://www.classicrendezvous.com/ :

2) The Legnano legend has its origins at the beginning of the past century. The first piece of news that refers to it is dated 1902, when a certain Lignon wins a road competition, the Val di Taro Cup.

The Legnano name then is lifted out of the fogs of myth and enters the reality of news accounts in 1908, when a certain Emilio Bozzi establishes the company "Emilio Bozzi & C.", with the intentions of building complete bicycles, as the English were already doing at the time. The first model produced is called Aurora. Afterwards, Bozzi teams up with Franco Tosi, a businessman from Legnano, who was looking precisely into new opportunities in the bicycles sector. For this reason Tosi had already purchased some patents from a renowned English company, the Wolsit.

The turning point comes in 1924, when Fascism was looking for sports heroes and only wanted Italian companies. Bozzi offers a lifetime contract to a young house painter, Alfredo Binda, and changes the company's trademark to Legnano, a single name. The symbol is Alberto from Giussano, the commander who fought and won over Federico Barbarossa.

These all turn out to be winning choices. The labor force produces excellent bicycles, while the team led by Edoardo Pavesi, the "avucatt" (the lawyer) makes a clean sweep of victories.

It is the Legnano of the golden years: 6 world titles (Binda alone wins 3 of them), 15 editions of the Giro d'Italia, 2 editions of the Tour de France, dozens and dozens of competitions. Binda is Pavesi' and Legnano's most valuable asset.

And in the meantime the rivalry with Bianchi starts to grow. But Pavesi has another ace up its sleeve: his name is Gino Bartali from Tuscany. Gino arrives at Legnano in 1936.

Bartali means the start of a new golden age, which turns into platinum when Pavesi, in 1939, recruits a young boy all skin and bones. The boy's name was Fausto Coppi. Without even realizing it, Pavesi has chanced upon two racers that will divide Italy in two, between rivalry and victories. One is confident and a country boy, the other delicate and elegant.

Until 1942, Gino and Fausto consistently triumph over their opponents, but the two of them are at "war", competitively speaking that is. The real war, unfortunately, is at hand and the rivalry between Gino and Fausto, like many other things, is swallowed up in tragically different events.

The last recollection by the Legnano fans is that of Fausto Coppi setting the new record of the hour at the Vigorelli arena in Milan, under enemy bombings. And of course he is riding a Legnano bicycle.

During the post-war years, Italy needs heroes more than ever, and the country finds them in the cycling world: the heroes are Gino and Fausto, who had returned to the competitions, and once again their rivalry flourishes. Fausto has changed ranks and is now racing on a Bianchi bicycle, but Bartali is Bartali: and his victory at the Tour de France in 1948 is an epic event. History has it that this victory warded off the revolution in our country after the attempt to assassinate Togliatti.

Other victories follow. The last one, in terms of chronological order and not of prestige, is in 1956 in Melbourne. The young racer Ercole Baldini wins the road competition at the Olympics. Afterwards Baldini manages to break Coppi's record of the hour while riding a Legnano bike, a very special model with an extremely low weight.

In 1987, the longtime rival Bianchi, steps in at a time of crisis and the white& celeste take over the olive green. And the legend can continue today with a company, Cycleurope, who has decided to invest in the Legnano name and history with a new wide range of bicycle models. The trademark has been redesigned and given a more modern look, an attempt to interpreting new tastes and trends. The new 2004 range is perfect for young consumers and families.

3) The Legnano firm began as Vittorio Rossi in 1902 and began producing bikes in 1906. After WWI, the company was bought by Emilio Bozzi, who also owned the Frejus & Wolsit brands. In the mid 1970s, Mr. Bozzi was assassinated by the radical Italian Red Guard party and thereafter the Bozzi family withdrew from business altogether. Later, in the 1980s, Legnano brand was acquired by Bianchi and given brief production and included sponsorship of a Pro team lead by Maurizio Fondriest.

Stories for the Italian Cycling Journal about rides, granfondos, having a good time cycling in Italy, Italian cycling history, etc. are very welcome. Contact me at veronaman@gmail.com. There are more than 1,400 stories in this blog. The search feature to the right works best for finding subjects in the blog and there is also a translate button at the bottom so you can translate each page.
Posted by Angelo senza la o at 4:32 AM

Email ThisBlogThis!Share to TwitterShare to FacebookShare to Pinterest
Labels: Legnano