Across the Atlantic for an Italian Swap Meet

John contributes this story of his trans-Atlantic trip to a swap meet in the Reggio Emilia region for cars, motorcycles, motor scooters and bicycles in March, 2010

"I didn’t have credentials to enter on set-up day, Friday, but I thought I’d drive to the event at the fairgrounds to scope it out anyway. I knew that I’d be heading out very early Saturday morning, and it wouldn’t hurt to get familiar with the short drive, parking, etc.

I promptly got lost and was too proud to take the GPS, but a couple kids were eager to help me when I asked them if they spoke any English. My technique is to always ask someone “Parla Inglese?” when I approach them for directions so that when I ask my questions in (busted-up) Italian, the bar/expectations is low. The kids were happy to try to explain the route to the Fiera, and ended-up jumping in my Fiat Panda to show me the way. When I got to a location of reasonable self-sufficiency, they hopped out and I drove-off. As I looked out the rear mirror, I could see them laugh and smile, indicating that they had a blast helping this foreigner.

There were hundreds of vans and transporters parked everywhere outside of the gates, but I was able to find a parking spot in an area that seemed fairly close. My friend Vicenzo was setting up in building B, so I called him and told him that I was outside of the main gate- he came to get me and give me credentials so that I could see what was happening. There 3 huge buildings filled with vendors and outdoor areas equal in size to the 3 buildings. Most everyone had finished setting up and were draping tarps over their goods for the night. 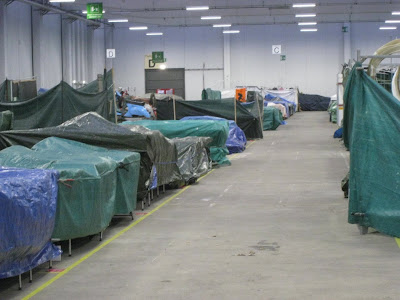 The next morning I got up at 5:00 am to shower, eat, ask the desk clerk additional questions about how to get there since the route I took with the help of the kids was roundabout. When I showed him my GPS and said, just get me to via Gramsci he seemed optimistic, but when he tried to enter an address on that road, it didn’t work… I got worried. After several tries, it turns out that the GPS wanted this philosopher’s first name, and the desk clerk hadn’t remembered his grade school studies. He finally remembered that it was Antonio. So he entered “via Antonio Gramci” and I left.

I waltzed-in with my lanyard pass at 6:00 am. My friend’s table was still under wraps so I walked around to see what was stirring. 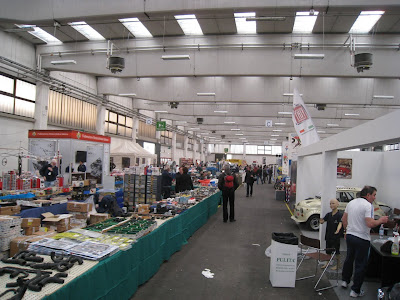 I stopped at an old guy’s table and asked about a few of his items including a very old Magistroni steel cottered crankset. It was marked simply “L. MAGISTRONI” without any circus tent. I’m pretty sure that in the 50’s, the “L” was dropped, so I nabbed this neat early example. He also had some shield style Campy gum hoods that were either original, or fantastic repros, so I bought some of those along with some early style Vittoria gum hoods. Another vendor had some nice Gnutti, Campy and Willier Trestina skewers for a reasonable price so I bought those too. 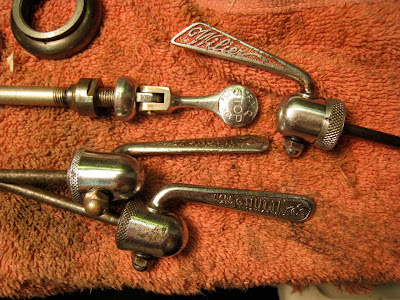 When I circled back to home base, my friend had an early Campy front der that was very expensive, but rare, rare, rare. He also showed me an original old Cinelli head badge and stem badge as well as a Cinelli headset and an ultra-rare “CINELLI” marked brakeset. 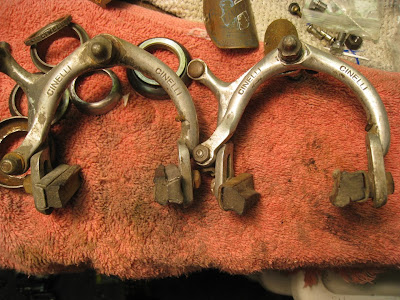 This batch of goodies was exactly what I came for- impossible to find anywhere and right up my alley. He wanted me to throw out a number, so I gave it some thought and suggested what I’d pay. I was not going to insult him with a low ball offer. He knows what this stuff is worth, and he has been good to me, so after some back and forth, we agreed on a price and I felt fulfilled.

Later in the day, I found a great tent outside, and the guy had hundreds of old hubsets. I fished-around and found 4 sets of very old FB small flange 36 hole hubs. These had FB logos that are subtly different from the later ones- they have much more detail in the feathers of the bird, and the typeface of “FB” is a little different. They were 100% new, so I bought them and when I got back to our hotel room, I checked the locknuts of one set- 1943! 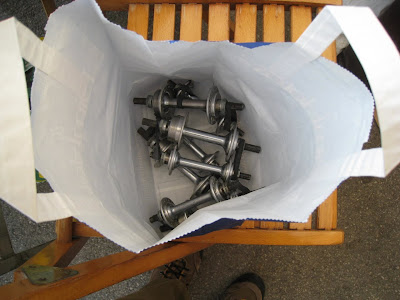 This event was mostly exotic cars, motorcycles and scooters with only a smattering of bicycles. I used to be in to cool old cars before bicycles, so I enjoyed seeing all the great and exotic sports cars, and otherwise rare vehicles. Alfas, Ferraris, Lancias, Laborghinis, Maseratis, Fiats, Citroens, Renaults, etc., etc. There were incredible motorcycles too- really old ones, newer ones like some BMW’s that competed in Paris Dakar, cute Bianchi motorcycles, 6 cylinder Benellis, etc. 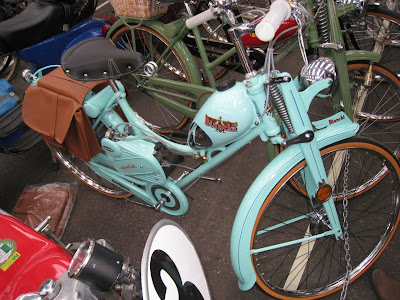 My wife didn’t come to the swap on Saturday, but I dragged her to it on Sunday. Shortly after we went in, we met a guy who recognized me from my checkered PEUGEOT jacket. His friend Brook Watts knew that we’d both be there, and mentioned that I’d be wearing that jacket. Rory Mason introduced himself (in English) and for the next few hours we had the greatest time walking the aisles and asking questions. 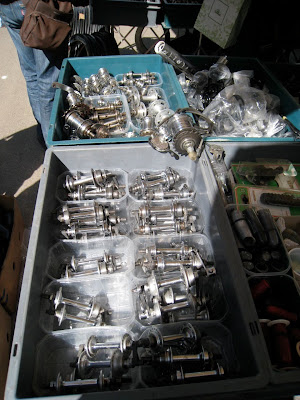 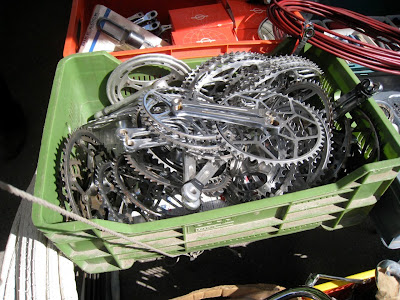 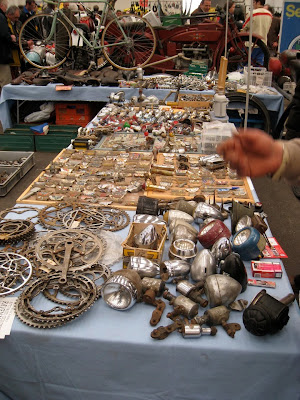 Lucky for me, Rory is fluent in Italian and so my wife’s and my experience was enriched as we chatted with some wonderful, and extremely knowledgeable Italians. Rory has caught the old racing bicycle bug, and is expert in Galmozzi and Legnano… and Atala, and...

I felt like I had accomplished pretty much everything I set out to do on Saturday, so Sunday was going to be short for us, so that we could hit the road to the Cinque Terra for a couple days.… 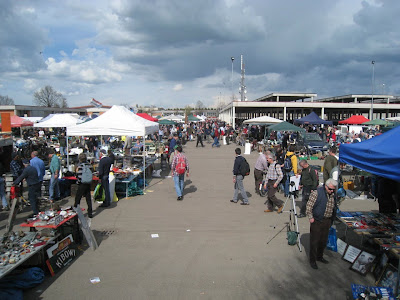 Sunday night was reserved for carefully wrapping and packing all the parts into the suitcase for the trip home. Of course we expected to eat another great dinner somewhere!

We have been casually studying Italian at several community education classes as well as through interactive DVD’s. There is no question whatsoever that being able to speak the language, even a little bit, is important to have a more valuable experience. It is our experience that few Italians speak English well, but many speak it a tiny bit. This, however, is much better than when I go to Japan for swap meets- virtually none of the Japanese speak English… at all.

Combining the swap meet with a small family vacation is the reasonable thing to do, and we had a very successful week of it. I hope to attend future events like this and make more friends along the way!"

Stories for the Italian Cycling Journal about rides, granfondos, having a good time cycling in Italy, Italian cycling history, etc. are very welcome. Contact me at veronaman@gmail.com. There are more than 1,300 stories in this blog. The search feature to the right works best for finding subjects in the blog and there is also a translate button at the bottom so you can translate each page.
Posted by Angelo senza la o at 5:02 PM