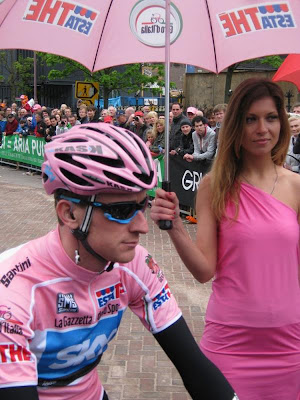 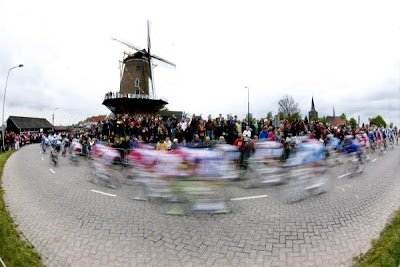 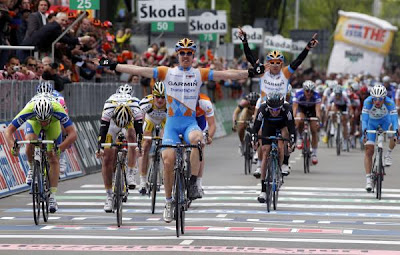 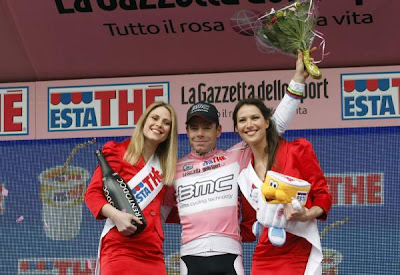 Utrecht, 9 May: Tyler Farrar (Garmin) won the 2nd stage, 210 km Amsterdam to Utrecht, in a bunch sprint. It was Farrar's first Giro stage win. The pink jersey passed from Bradley Wiggins (SKY) to World Champion Cadel Evans (BMC) who leads the GC by only one second over Farrar. Wiggins was involved in two crashes and lost 32 seconds.

It was 8 C degrees and humid at the start of a stage that ultimately had many crashes on the narrow and dangerous roads better suited and navigated by "classics" specialists.

"It’s fantastic to have won. It's certainly one of the special ones. Last year was a breakthrough year winning what I did. To win the first sprint is nice. It takes some pressure off for the rest of the race,” Farrar said. "The team were fantastic. I couldn't have asked for a better delivery to the line. We've said since the beginning of the season that we're putting a lot of effort into beefing up our lead-out and you saw today it has paid off. Sutton (SKY) tried to jump us into the last turn but Dean did a fantastic job closing the gap and gave me a clean tow to the line.”

Cadel Evans is wearing the pink jersey again after eight years, having worn it once before for one day near the end of the 2002 Giro. "I was 25 years old when I last wore the pink jersey in 2002. Now, everything is different. I have a strong team that likes to work hard." Regarding tomorrow, "We will not look at keeping the jersey at any cost tomorrow. Farrar is only one second behind me. I'm not going to look for bonus seconds on the road tomorrow against him. But I'll drop him off on the Zoncolan if he's still there!".

Tomorrow is the last stage in Holland, 224 km from Amsterdam to Middelburg. A perfectly flat course. Tuesday is a very early rest day for the riders as the Giro transfers back to Italy for the remainder of the race. The volcano in Iceland is once again spewing and causing airport closures in Europe; the organizers have arranged for transfers by bus if necessary.

Stories for the Italian Cycling Journal about rides, granfondos, having a good time cycling in Italy, Italian cycling history, etc. are very welcome. Contact me at veronaman@gmail.com. There are more than 1,300 stories in this blog. The search feature to the right works best for finding subjects in the blog and there is also a translate button at the bottom so you can translate each page.
Posted by Angelo senza la o at 11:53 AM