Armstrong: "More About the Giro in a Week" 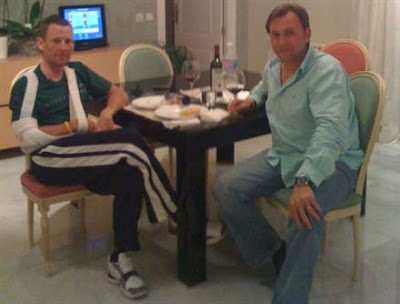 Lance Armstrong spent the night in Madrid in Johan Bruyneel's home before taking a flight from Madrid to the U.S. Before arriving in Madrid, Armstrong answered some questions at the hospital:

How did the crash happen?“At the end of the race, people started to get a bit excited to win the race. Everybody wanted to be in the front and couple of guys crashed in front of me, crossed the wheels and I hit them over the top. It happens quick when it happens. It could have been worse, I suppose. I have road rash abrasions on right hip and arm but the big problem is the broken collarbone. I never had this before. It is pretty painful. Now we must have to see how it heals. I will go back to the US and there we will decide on surgery.”

You must be very disappointed. Is the Giro participation in jeopardy?“I am very disappointed. Very. Especially for the Giro. Now the biggest problem is the pain. It hurts. We will see. The guys in the hospital in Valladolid were great and very nice and helpful. But now I feel miserable. I need to relax a couple of days, fix the problem and make a plan. I hope I can tell you more about the Giro in a week.”

You almost never crash.“I was thinking the same thing in the hospital that this never happened in my 17 years of pro cycling. That’s cycling. It’s nobody’s fault. Crashes happen all the time. It is part of the job.”

A Twitter update from Johan Bruyneel, the manager of Astana (who was not at the race), said: "Clean collarbone fracture without complications. Should be fast recovery ..."