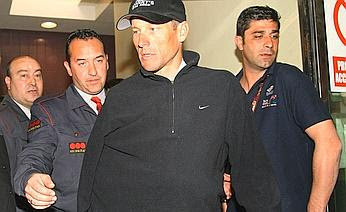 March 23: Lance Armstrong crashed on Stage 1 of the Vuelta a Castilla y León (Spain). He was taken by ambulance to the hospital in Valladolid where he was diagnosed with a fracture of the right collarbone and other less serious injuries.

It appears certain that he will miss his planned entry in the Giro del Trentino (April 22 to 25) and the Italian press is reporting that Armstrong said of his entry in the Giro d'Italia, "Difficile correre il Giro" (Difficult to race the Giro). Armstrong is now headed back to the U.S. to see his doctors.

Photos and video: Armstrong on the ground, leaving the hospital, RTVE television captured the immediate aftermath of the crash.