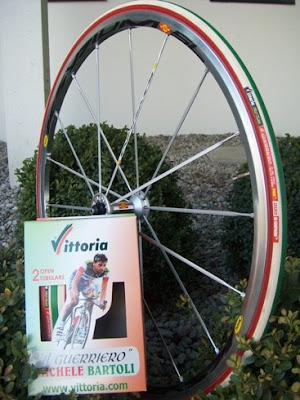 Vittoria is producing a special edition of tubulars in the Italian flag colors. The tires are being made in honor of Michele Bartoli, “Il Guerriero”. These special edition tires are only available in one size, 19-622/700×19, the size that carried Bartoli to his victories.
ed. note: reader Krister K. writes in: "the box (in the photo) says open tubular which is what the clincher tires are called by Vittoria.... I remember when these tires came out (not exact date ) but it was when Bartoli was a star. I get a little suspicious because of the size 700x19 which is not a really desirable size for most people (23 is the common size ), could it be that they found a NOS stock and are trying to move it?".
These are clinchers, not tubulars. Sorry for the error.

The flag of Italy (often referred to in Italian as Il Tricolore) is a tricolor featuring three equally sized vertical pales of green, white and red, with the green at the hoist side. In its current form it has been in use since 19 June 1946 and was formally adopted on 1 January 1948. In 2003, after 206 years of service, the authentic colours of the Italian tricolour were specified by the government, but later amended in 2006 after hot debate on the chosen shades.