Goal: The Chapel of the Madonna del Ghisallo 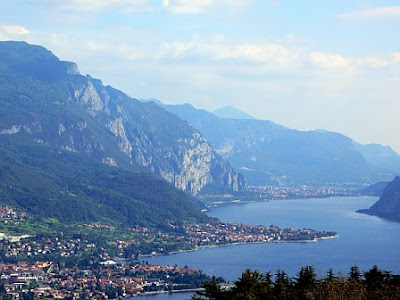 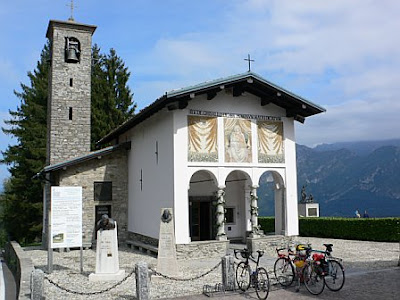 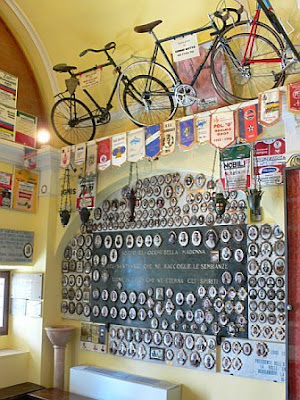 Laura from Blue Marble Travel, http://bluemarble.org/, specializing in European bike trips since 1986, writes in of her favorite ride.

"I have travelled to many amazing places all over Europe as a result of working for Blue Marble Travel. I'm often asked which trip is my favorite, and I have no easy answer. But when asked to write about my favorite ride in Italy, one day immediately came to mind: our "loop" route (out and back) in Como, on our Italian Lakes trip.

The Alpine Lakes are stunningly beautiful. Photos do not do them justice. In fact, even in person, you can hardly believe that the landscapes you're gazing upon can be real. Dramatic mountains emerging from crystalline blue seas, dotted with the most picturesque villages, flowered terraces and lakefront palazzos. It's a vacationer's paradise, for cyclists and non-cyclists alike.

I consider myself a bike traveller -- as interested in what is along the route as the route itself. Neither am I an athlete. But I'll tackle a hill if there's something interesting at the top, and then can indulge in a gelato or tiramisu with a bit less guilt. So when a few hardy souls proposed setting out on the challenging option of the day's proposed loop ride, I was game.

The route takes you across country to the Lecco arm of the Lago di Como (Lake Como’s shape is roughly that of an inverted “Y”, and Lecco sits at the bottom of the right branch, while Como sits at the bottom of the left). The ride is relatively difficult, complete with fortified hilltops, which you climb, rushing waterfalls, and views that look like they are seen from a plane. Except that you biked to them, and felt every meter of the climb.

Our goal: the Chapel of the Madonna del Ghisallo, and accompanying cycling museum. Well, you see, in Italy there is a virgin protecting just about everything. Why not cyclists? The Madonna of Ghisallo is the protectress of racing cyclists, and her chapel is a shrine adorned with the accoutrements of famous cyclists of the ages. Eddy Merckx’ bike is here, and Bernard Hinault’s jersey, and a touching memorial to those who died while racing. Not to mention lots of random photos, pieces of other bikes, clothing….

Of course, you have to climb a big hill to see all this. How fitting! Bikers receive a euro off the museum admission if you show your bike, and can park it for free inside the museum, in a place of honor :-). And we found a remarkable number of fellow cyclists climbing the hill with us, to pay homage to the artifacts, or to light a candle for Fabio Cassartelli, or whatever.

This is a special place if you have ever been interested in cycling as a sport rather than (or in addition to) as a means of travel. And the view from the chapel, down to the lake, is unforgettable."

Photos: view of Lago di Como, the Chapel of the Madonna del Ghisallo, memorial to cyclists who have died while racing