Dino Buzzati at the 1949 Giro d'Italia 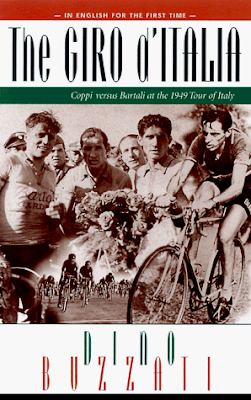 Stage 10 of the 2009 Giro d'Italia, from Cuneo to Pinerolo, will pay homage to Fausto Coppi's epic 1949 stage win. Coppi finished 11 minutes ahead of second place Gino Bartali on the 250Km stage, 60 years ago, after a 192k solo break. It wasn't just one stage that was memorable that year, in fact, the battle between Coppi and Bartali extended for the entire three weeks producing one of the greatest Giros ever. VeloPress translated 1949 newspaper dispatches from Dino Buzzati and weaved them into a book published in 1998. The softcover book is out of print but can be found on the used book market.

Dino Buzzati was an Italian novelist, short story writer, painter and poet, as well as a journalist for Corriere della Sera. Buzzati was born at San Pellegrino near Belluno, on his family's ancestral villa. Buzzati's mother, a veterinarian by profession, was Venetian and his father, a professor of international law, was from an ancient Bellunese family. Buzzati was the second of his parents' four children. In 1924, he enrolled in the law faculty of the University of Milan, where his father once taught. As he was completing his studies in law, he was hired, at the age of 22, by the Milanese newspaper Corriere della Sera, where he would remain until his death. He began in the corrections department, and later worked as a reporter, special correspondent, essayist, editor and art critic. It is often said that his journalistic background informs his writing, lending even the most fantastic tales an aura of realism. During World War II, Buzzati served in Africa, as a journalist attached to the Regia Marina. After the end of the war, Il deserto dei Tartari (ed. note translated into English as The Tartar Steppe) was published Italy-wide and quickly brought critical recognition and fame to the author.

Friend April Pedersen, writing in her excellent website (http://www.biciveneto.it/) about cycling in the Veneto, says of Buzzati:

"In 1949 he was assigned by the newspaper Corriere della Sera to cover the Giro. Buzzati was not a sports writer and although he loved cycling, he had never seen a bicycle road race in his life! It was probably because of this that he was able to experience and write about the Giro in a a unique, original, and touching way, capturing not only its drama and epic majesty, but its humanity, poetry, magic, and romance. The following passage (ed. note: translated by April from Italian from Corriere della Sera, June 14, 1949) is one of my favorites.

The Fable of the Bicycle Will Never Fade Away

And next year, the start will once again take place, and yet again the year after, from spring to spring...Until (but will we still be living?) reasonable people will say that it's absurd to continue; in those times bicycles will have become rare, almost comical junk, used by a few nostalgic maniacs, and voices will be raised, saying that it's time to put the Giro to rest.

No, don't give up, bicycle. At a cost of appearing ridiculous, set sail once again on a fresh May morning, off along the ancient byways of Italy. We will travel for the most part by rocket train then; atomic energy will save us even a minimum effort; we will be very powerful and civilized. Pay us no mind, bicycle. Fly, with your little energies, among mountains and valleys, sweat, toil, and suffer. The woodcutter will still descend from his isolated mountain hut to cry "Evviva!," fishermen will come up from the beach, clerks will abandon their ledgers, the blacksmith will let his flame die out to come to celebrate you, the poets, the dreamers, the creatures humble and good will still line the roadsides, forgetting, to your merit, their troubles and hardships.

And maidens will cover you with flowers."