One Day Inside the Giro d'Italia 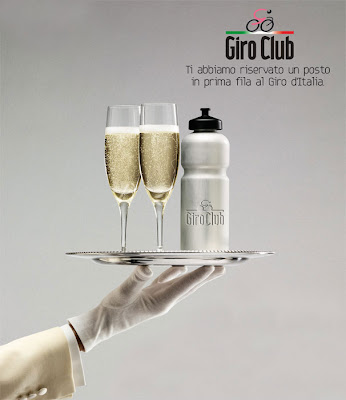 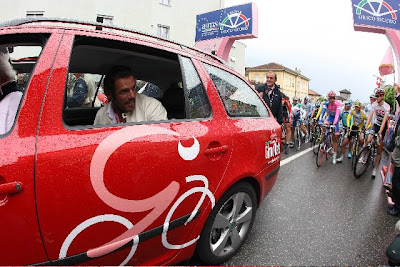 The Giro d’Italia as you have never seen it before

In the course of the previous years, a great number of cycling race supporters and “superfans”, have pressed the Rcs Sport/La Gazzettadello Sport organizers to study a way to allow them to enjoy the Giro d’Italia from the inside, in order to fully experience the excitement involved. Even for one single day.

The issue of staying in the heart of the event, on board a vehicle with an experienced driver at the wheel, (former cycling champions would be the best in such case), or following the race’s development from a helicopter, especially during the crucial mountain stages, has been for a long time wishful thinking. Moreover, many cycling lovers were longing for the excitement at the finishing line, and even by simply having access to the Giro village in physical contact with the colourful racing crowd, mixing together with the competing racers, the former champions, or VIP guests. Just to be able to proudly say, "Yes, I was there."

This year, on the occasion of the Centennial Giro, with its unique scenery – Venice, the Cinque Terre, the Vesuvio stage, the conclusion in Rome, to name a few, the possibility becomes workable, even if restricted to a limited number of participants. This is the reason why we recommend to book on time one of the special service packages offered by Cisalpina Tours and Vivere & Viaggiare, in agreement with Rcs Sport. The proposals are offered on sale by the 400 Italian branches of the Giro d’Italia official agency, sole licence holder of this project. The various packages are able to satisfy all kind of requests, i.e. from people willing to enjoy the emotion of the arrival in the guest tribune and the VIP village, to people willing to spend the entire day in the middle of the pink convoy, enjoying the full set of emotions, i.e. car ride, helicopter tour, up to the finishing line. Please find here under a summary of the different opportunities, according to the expense level. Each offer has a proper name and special features.

GIRO CLUB DRIVE IN: full day by car along the race route;

GIRO CLUB FLY & DRIVE: the entire leg by car and helicopter, along and over the race route;

GIRO CLUB PRIVÉ: watching the arrival from inside the VIP Village, in a privileged position close to the finishing line, with seated lunch and full screens to follow the race;

GIRO START & GO: access to the Departure Village, and to the Guests’ Tribune for the arrival;

GIRO CLUB DRIVE IN (TIME TRIAL): access to Departure and Arrival areas, plus a lap of the route in the track of a racer in his team’s vehicle.

GIRO CLUB TEAM: special packages for groups – to be agreed upon – with dedicated hospitality service, catering and screens for watching the race in the Arrival area.

Cisalpina guarantees, of course, a drive-back service, to the leg starting place, and offers also week-end packages including overnight stay (one or two nights). As you can see, the menu is able to suit all tastes and all pockets.

Details at www.cisalpina.it (but don't appear as of this writing). You can try E-mail: giroclub@cisalpinatours.it
Thanks to my friend April for supplying this information.
Stories for the Italian Cycling Journal welcome; contact veronaman@gmail.com
Posted by Angelo senza la o at 11:10 AM