To conclude following the 2012 Giro d'Italia some follow-up items and things I didn't get to.

Felice Gimondi on the state of Italian riders in the grand tours:
"The Giro d'Italia, which ended Sunday, was very interesting because it has brought us new and exciting faces. It is a pity that the Italian riders have failed to reach the podium in Milan. This Giro has shown us that there are no leaders in the various Italian teams and that Italian cycling at the moment does not have riders that are able to win stage races. Basso disappointed, Hesjedal should thank Liquigas for having worked for him by playing into his hand."

Before the start of the Giro, Michele Acquarone was asked about how he will persuade other top riders to chose the Giro in the future. His answer:
"Last year at the bike show in Friederichschafen I met Edvald Boasson Hagen and asked him why he hadn’t been back since 2009, when he won a stage. He said it was simple – the only race he’d ever dreamed about and watched when he was a kid was the Tour de France. And that’s the case for a lot of people: cycling is the Tour de France. Our aim is to make it so that cycling is the Tour de France and the Giro d’Italia. We want kids from all over the world to have grown up watching the Giro. Only then will they always want to come when they’re professionals."

The only Italian to wear the Maglia Rosa was Adriano Malori of Lampre-ISD.

The were several "Le Miss" that I didn't mention, I wouldn't want them to feel slighted: 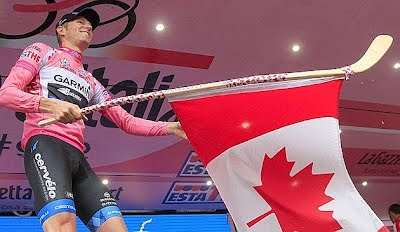