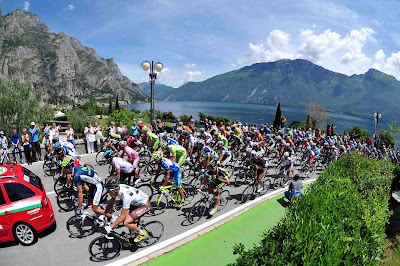 The start today was in the beautiful lakeside town of Limone sul Garda with 174 of the original 198 riders starting. The stage will finish in Falzes after 173 km. 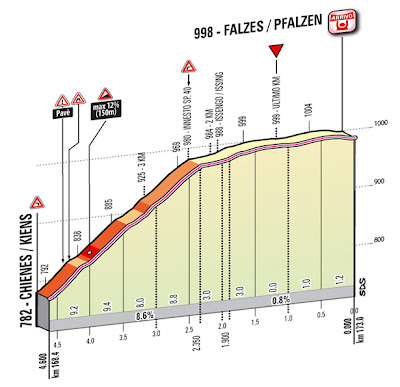 Today's finish is classified as a "medium mountain" stage that is slightly uphill for its entire length, and with a challenging finish at the end. At 4.6 km from the finish the road turns left and riders face a 2.0 km climb with a cobbled section at the bottom; the climb averages 9%, 12% maximum. Then, a flattish 2 km before the final 200m which are slightly downhill.

The last time the Giro visited Falzes was in 2004 when Daminao Cunego won the stage ( stage 16), took the Maglia Rosa and went on to win the Giro.

In the finishing map, above, you will notice two names for the finishing town: Falzes is the Italian name and Pfalzen is the Austrian name. This is typical when you are in the Trentino-Alto Adige/Südtirol region of Italy. The region was part of Austria-Hungary and its predecessors, the Austrian Empire and the Holy Roman Empire from the 8th century until its annexation by Italy in 1919; Italy was which awarded the region after World War I under the terms of the Treaty of Saint-Germain.