Ivan Basso's Thoughts Ahead of Giro 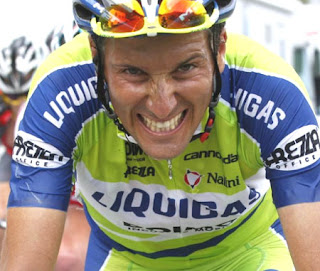 Why did you decide to wait for the last moment to enter the Giro?
"I had crashed twice earlier in the season and I didn't know my condition. The Tour of Romandie gave me good feedback, I've always ridden at the front at the same pace of the best riders. Now I can go to the Giro with confidence."

But in the Tour of Romadie you crashed again...
"It was a random incident, a Frenchman had taken his hands off the handlebars. However, during the race I felt very good. I'm not at my top level of condition but the Giro will be won at the end so I have time to improve."

You seek your 3rd pink jersey like Brunero, Bartali, Magni, Gimondi, Hinault. Which of these do you resemble?
"I'm not obsessed with the objective of success because it will not be my last Giro, I will race at least two others. As for the greats of the past, I admire Gimondi."


It's appropriate that the Grio will celebrate his 70th birthday.
"Felice has been very close to me during the most critical part of my career (in 2007 Basso admitted he was planning to use doping and was suspended for two year). He is special."

The critics say that this is a Giro with few stars....
"Unfortunately the placement on the calendar affects this. It is the first major stage race and those going to the Tour de France prefer to stay home. However, there will be Frank Schleck, who has finished 2nd in the Tour, Scarponi, who has already won one Giro. And, then Kreuziger, Rujano, Rodriguez, Gadret and above all Cunego who will not only be riding next to Scarponi."

You, instead, will not have Nibali like in 2010 when you won...
"I will miss him a great deal. But, Vincenzo does well to have the Tour as his goal. I'll probably be at the Tour but I'll ride in support."

Is the dream of winning the Tour gone for you?
"I am realistic, it's almost impossible for me to win. Almost."

So, let's focus on the Giro. Do like it? And what could be the climatic stage?
"It's very beautiful but full of pitfalls, starting from the wind and weather in Denmark."

There will be many climbs such as Cervinia, Valparola, Duran, Staulanza, Giau, Manghen, Pampeago, Tonale, Mortirolo, Stelvio... Which will be decisive?
"The Stelvio because it's legendary and comes in a stage with 6000 meters of elevation gain, and also on the penultimate day."

It was there in 2005 that you went into crisis and lost the Giro...
"I should redeem myself".

Will you miss Contador a bit? What do you think of his disqualification?
"In cycling there are already too many people who speak without any knowledge. Of  Alberto I can only say that he is the strongest rider in the world for the grand tours.

But, he's out for doping. And, recently they caught Galimzyanov who confessed of using EPO...
"Yet cycling has changed, it is the sport that has invested the most against doping, and I feel I can say that it is finally clean."

Basso, how would you like to see yourself on May 27th at the end of the 2012 Giro?
"On the podium, in the pink jersey, celebrating with my kids, Domitilla, Santiago and Levante."

Stories for the Italian Cycling Journal about rides, granfondos, touring, having a good time cycling in Italy, Italian cycling history, etc. are always welcome. Contact me at veronaman@gmail.com. There are more than 2,300 stories in this blog. The search feature to the right works best for finding subjects in the blog. There is also a translate button at the bottom so you can translate each page .