80th Anniversary of the Maglia Rosa 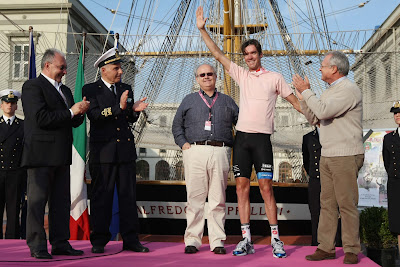 Today, May 10, 2011, marks the 80th anniversary of the Maglia Rosa, the pink jersey. It was exactly 80 years ago that Learco Guerra wore it for the first time as the symbol of the leader's jersey in the 1931 Giro d'Italia. The Maglia Rosa made its official debut at the end of the first stage, from Milano to Mantova.

Today, in the splendid setting of the Naval Academy at Livorno (which this year marks its 130th anniversary), in the presence of Comandante Ammiraglio Pierluigi Rosati and other local officials, Giro Director Angelo Zomegnan, Learco Guerra, grandson of the same name of the "human locomotive", presented a replica of the original jersey to David Millar (Team Garmin Cervélo), race leader.

Stories for the Italian Cycling Journal about rides, granfondos, watching and touring during the Giro, having a good time cycling in Italy, Italian cycling history, etc. are always welcome. Contact me at veronaman@gmail.com. There are more than 1,900 stories in this blog. The search feature to the right works best for finding subjects in the blog. There is also a translate button at the bottom so you can translate each page.
Posted by Angelo senza la o at 4:12 PM