Stage 17, Wednesday, May 25, 2011, FELTRE-TIRANO, 230 km. The Giro's guest of honour: the English designer Paul Smith, a great cycling fan, fulfils today the desire to live a Giro stage among the riders. At the passage of the athletes from Trento, Sir Smith will “enter the race" in the car of the Giro d’Italia Director Angelo Zomegnan. 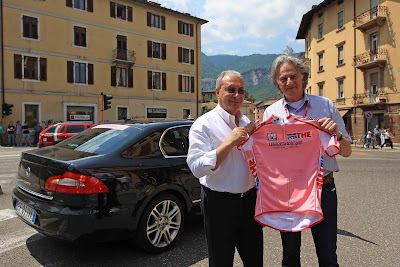 At the beginning of the climb to the Passo del Tonale the bunch, paced by the Liquigas – Cannondale riders, reduces the gap: 5’45”.

King of the Mountain, 2nd category: Passo del Tonale (BS) [m 1.883]: Gastauer is first over the climb ahead of Dupont, Bakelandts and the rest of the breakaway but Giordani and Engels lost contact: a 14-man break. The field is 6’10” back.

Intermediate Sprint: Edolo (BS): Bakelandts gets the IS ahead of Sivstov, Lastras and the other leaders. The gap is going down and the bunch, paced by the Geox – Tmc riders, crosses it 3’55” behind.

On the uphill to the Aprica, with 25 km to go, the field chase the breakaway 3’42” behind. Attempted and failed accelerations on the front. Le Mevel is suffering.

King of the Mountain – 3rd category, Aprica (SO) [m 1.173]: Lastras first followed by Visconti, Siutsu, the rest strung out. The bunch, paced again by the Liquigas – Cannondale riders, has a 3’40” delay on the top of the mountain. On the downhill Lastras is leading. Nibali on the front of the chasers. 10 km to go, the breakaway keep a 3’10” lead.

Last km: the 4 riders fight for the win. Ulissi accelerates, Visconti comes from the right to pass Ulissi along the left close to the barriers; Lastras on the other side of the road. Visconti shoves Ulissi out of his line twice. 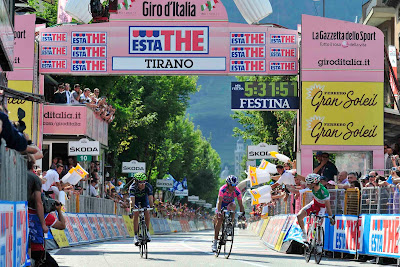 Giovanni Visconti takes the win at the foto finish ahead of Giovanni Ulissi and Pablo Lastras. The Panel of Commissaires, after watching the film of the race, relagate Giovanni Visconti from the first to the third place. Therefore, 22 year old Ulissi ((Lampre - ISD) wins the stage ahead of Lastras. The Italian Champion in third.

Ulissi: "I'm so happy, I can't believe I won a stage in Giro d'Italia. I knew that the stage was suitable for the breakaways, so I paid attention in the first part of the race. I joined in a good action, then I managed my energies. In the sprint, I think that I did no harm and that I deserve the victory". 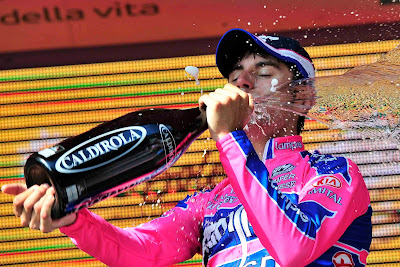 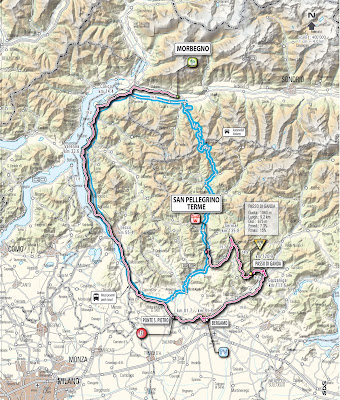 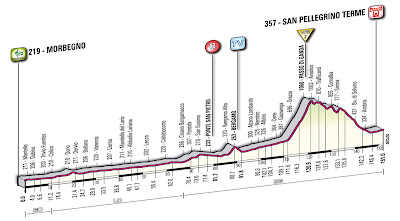 Stories for the Italian Cycling Journal about rides, granfondos, watching and touring during the Giro, having a good time cycling in Italy, Italian cycling history, etc. are always welcome. Contact me at veronaman@gmail.com. There are more than 1,900 stories in this blog. The search feature to the right works best for finding subjects in the blog. There is also a translate button at the bottom so you can translate each page.
Posted by Angelo senza la o at 5:14 AM