At 2:20 pm, 194 are given the start for the shortest stage of this year's Giro. High pace from the beginning, a series of attacks on the front of the field.

At km 13, Berard and Canuti clear off and are followed first by Vorganov and Pineau and then by Visconti, Pesamontes, Bak, Selvaggi, Betancourt and Cherel. The breakaway has an 18” lead at km 18.

The pace of the fieldis set by Euskaltel – Euskadi riders. In Moiano (km 22) the bunch catches the escapees. 5 riders successfully give it a try again: Visconti, Bak, Canuti, Pineau and Montaguti.

King of the Mountain – 2nd category, Serra della Strada (AV) [m 705]: Canuti first over the climb ahead of Pineau, Visconti, Bak and Montaguti; Hoogerland alone at 1’15”. The bunch is chasing them at 2’10”. A flat for Pineau who manages to catch the other leaders.

30 km to go and the five-man break keep 28” of advantage over Hoogerland and 2’18” over the bunch. Average speed after two hours: 41,100 kph. Hoogerland catches the leaders. 6 men leading the race.

The ascent to the Sanctuary of Montevergine starts – with four men leading – as in the meanwhile Visconti and Pineau loose contact. The break maintains 40” of advantage.

Hoogerland, Montaguti and Canuti are also reeled in by the field with 11 km to go. Bak continues solo but the bunch catch him with 8 km still to race. De Clerq attacks.
With 5 km to go, the Omega Pharma – Lotto rider has a 32” advantage. Ochoa jumps ahead of the bunch.

– 3 km: De Clerq rides with 30” over Ochoa and 40” over the field. Acceleration of Pirazzi who joins and takes over Ochoa, setting to chase De Clercq with the bunch strongly speeding up. Pirazzi is caught.

Last kilometre. De Clercq solo with the bunch at his heels.

Michele Scarponi, "I would have been happier with the victory in my palmares, but I prefer to think that I obtained 12 precious seconds: on this kind of climb, where 29 riders reached the arrival with the same time, obtaining seconds is a very good thing. Today I set an important part of my project and I want to thank my team mates for having supported my in the best way". 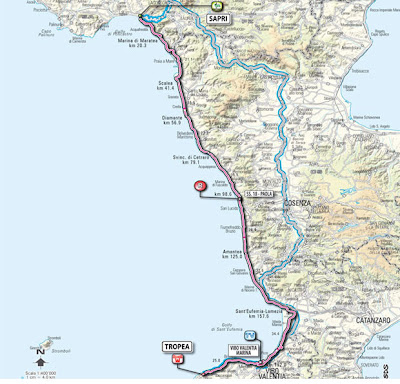 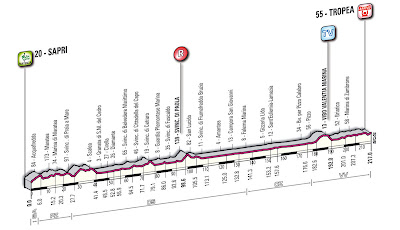 Stories for the Italian Cycling Journal about rides, granfondos, watching and touring during the Giro, having a good time cycling in Italy, Italian cycling history, etc. are always welcome. Contact me at veronaman@gmail.com. There are more than 1,900 stories in this blog. The search feature to the right works best for finding subjects in the blog. There is also a translate button at the bottom so you can translate each page.
Posted by Angelo senza la o at 5:58 AM