START
The Giro d’Italia pays tribute to Wouter Weylandt on the day of his funeral. Before the start, a minute’s silence in memory of the Belgian rider. 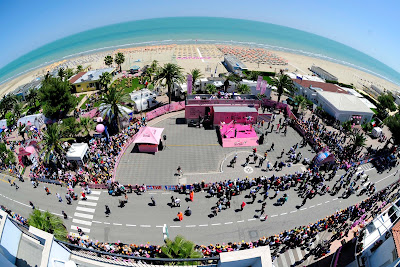 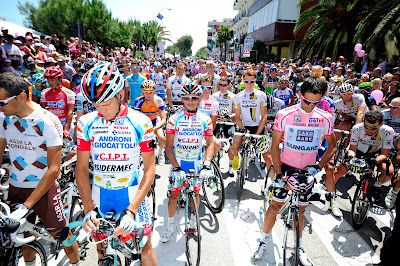 188 riders start out at 1:32 pm – final destination: Castelfidardo. At km 21, an 8-man breakaway: Vicioso, Frapporti, Brutt, Petacchi, Kiryienka, Ventoso, De Clercq and Reda. Four of them give up and Kiryienka, Ventoso, Brutt and Reda are left in the lead. The latter has a puncture and the bunch catch him. In Appignano del Tronto (km 42) there are three on the breakaway. Average speed after one hour: 43,200 kph.

On the uphill towards the KOM, Ventoso is caught first, then Brutt and Kiryienka are also reeled in by the bunch. At km 44 the field is packed again and the Vacansoleil – Dcm riders dictate the pace.

King of the Mountain, 4th category, Monte Ripaberarda (AP) [m 486]: Moreno gets first over the climb ahead of Millar and Rovny advancing the field by a few seconds.

King of the Mountain, 4th category, Monte Vidon Combatte (FM) [m 393]: Betancourt first, followed by Agnoli, Stortoni and the other eight escapees. The peloton’s pace is dictated by Saxo Bank – Sungard riders and have 2’ of delay. Average speed after two hours: 41.800 kpm.

King of the Mountain, 4th category, Rapagnano (FM) [m 326]: Agnoli gets over the climb ahead of Betancourt, Kruijswijk and the other escapees. The main bunch, always led by the team mates of the Pink Jersey, Alberto Contador, gets there 2’ later. In this phase, the chase – with an increasing tempo – is led by the Farnese Vini–Neri Sottoli and Astana riders.

King of the Mountain, 4th category, Morrovalle (MC) [m 249]: Moreno first, Agnoli second , Stortoni third and then the other escapees. The field is at 1’35” behind.

Intermediate Sprint, Recanati (MC): Moreno reaches the sprint solo with 20” over Le Mevel, Konovalovas and the closest chasers. The field is at 1’18”. Konovalovas goes for chasing Moreno and catches him with 10 km to go. The bunch catch all the other escapees. 2 men are now leading the race.

–3 km: Moreno and Konovalovas keep a 40” lead over the field paced by the Lampre – Isd riders.

Last km: the escapees are chased. Moreno accelerates but Gadret jumps put, catches him and flies to the finish. 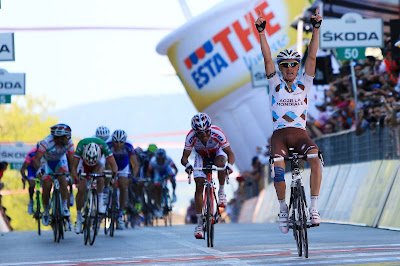 Gadret: "In the finale, I felt I had good legs. I had the team at my service. They put me in the best position at the bottom of the climb. Rinaldo Nocentini looked after me to perfection. When I saw the two leaders, Konovalovas and Moreno, 12 seconds ahead of us, I realized they were slowing. As soon as the other riders slowed down at the front of the bunch with 300 metres to go, I jumped and I told myself that I would look behind only once I passed the finish line. I'm very happy, this is the most beautiful win in my career."

Scarponi, hoping to win near his hometown: "It's a pity I could not give my supporters the joy of a victory. I was willing to be a protagonist, my team mates supported me in the best way, but maybe the arrival was too fast to make the difference. Gadret was fantastic, he surprised everyone with his action". 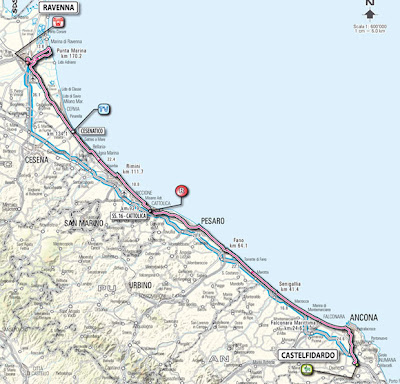 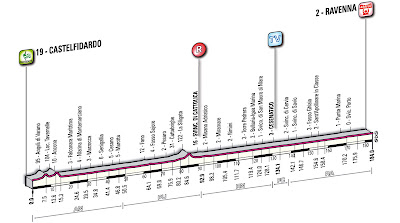 Stories for the Italian Cycling Journal about rides, granfondos, watching and touring during the Giro, having a good time cycling in Italy, Italian cycling history, etc. are always welcome. Contact me at veronaman@gmail.com. There are more than 1,900 stories in this blog. The search feature to the right works best for finding subjects in the blog. There is also a translate button at the bottom so you can translate each page.
Posted by Angelo senza la o at 4:14 AM