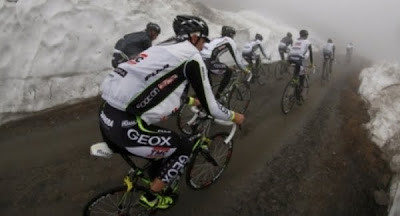 In the afternoon the team held a press conference. "It’s going to be quite a hard Giro d’Italia, from the first stage to the last. I think it’ll be the most challenging out of all the ones I’ve faced so far," explained Carlos Sastre. "There are lots of important stages. The Zoncolan is very tough, but so are the Grossclockner, the super-stage in the Dolomites with the Gardeccia and the Colle delle Finestre in the same stage, and don’t underestimate the first uphill finishes the initial TTT.”

"Contador is definitely one of the favorites, and so are Vincenzo Nibali and Michele Scarponi," said Denis Menchov. "Anyway, I think our team is good and ready to play a role in the fight for the Pink. It’s a very tough Giro but it will be for us as it will be for all the other guys vying for the final victory."

At the Giro d'Italia presentation back in October, Michele Scarponi said, "The harder it is the better it is for me. There is a lot of climbing and I like that, so I'll give the route nine out of ten. The Colle delle Finestre is a beast and will be especially tough. I think it will be the decisive stage for whoever wants to win the Giro." 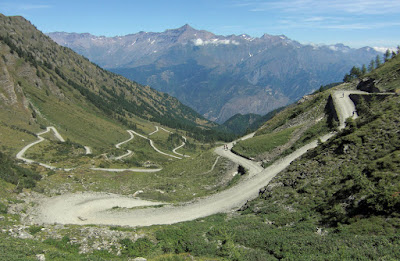 Stories for the Italian Cycling Journal about rides, granfondos, having a good time cycling in Italy, Italian cycling history, etc. are always welcome. Contact me at veronaman@gmail.com. There are more than 1,900 stories in this blog. The search feature to the right works best for finding subjects in the blog. There is also a translate button at the bottom so you can translate each page.
Posted by Angelo senza la o at 6:16 PM