162 riders roll out at 11.25 am. Felice Gimondi and Eddy Merckx are enjoying the race. 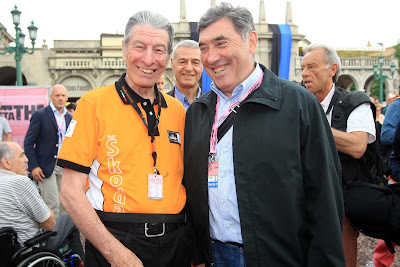 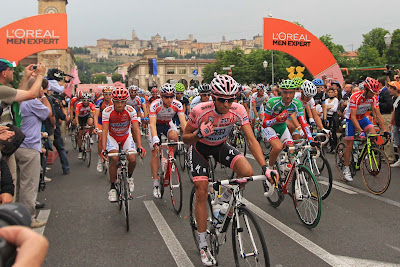 The bunch, paced by the Acqua & Sapone and Farnese Vini – Neri Sottoli riders, does not leave much room: at km 14 the field is 26” back. The breakaway is caught at km 28.

At km 48, Bak, Rabottini and Pineau fly off; the field does not respond. Average speed after one hour: 50.200 kph.

At km 54: the leaders have a 2’05” lead. The three front-runners do not cooperate and Pineau decides to launch an attack on the two other. At km 60, the QuickStep rider has a 38” lead over Bak and Rabottini and 6’25” over the peloton.

Pineau decides to wait for the two chasers and, at km 68, the three are at the front together. Average speed after two hours: 45,900 kph.

At the beginning of the climb to the Mottarone the bunch, paced by Acqua & Sapone, is 5’ behind. Average speed after three hours: 41,600 kph. Almost at the end of the ascent Garzelli (the oldest rider in the Giro) jumps away from the peloton as the chasers are approaching the break.

King of the Mountain – 1st category, Mottarone (VB) [m 1.341]: Pineau comes over the climb ahead of Rabottini and Bak, Garzelli 26” behind, with the main bunch at 1’10” . On the downhill Grazelli, then Chenel and Tschopp catch the three escapees. 6 men are leading now. 50 km to go, 3’35” of delay for the bunch, paced by the Katusha riders.

Intermediate Sprint, Ornavasso (VB): Bak first to cross the IS, ahead of Tschopp, Garzelli, Pineau, Chevel, Rabottini. The bunch pass 2’22” later. The last climb leading to the finish line begins. Bak is suffering, 5 men are left to lead. Di Luca is guiding the chasing group with the Pink Jersey. 25 km to go: Pineau and Rabottini accelerate, the rest of the break is caught by the bunch. With 20 km to go, 36” of lead.

13 km to go: Pineau and Rabottini are caught by the field – 50 riders approx. – which is always paced by the Team Katusha riders. The Green Jersey, Garzelli, in difficulty.

6 km to go, Tiralongo accelerates. With 5 km to go, the Astana rider has an 11” lead over the Pink-Jersey group.

– 3 km: 20”. Dupont jumps out with Rodriguez, on his wheel, who leaves the French rider behind and chases Tiralongo.

Last km: sprint by Contador who catches and passes Rodriguez and joins Tiralongo - 400 metres. Contador has a few words with Tiralongo and rides to the line with his former teammate from Astana. Together they fly to the finish line. 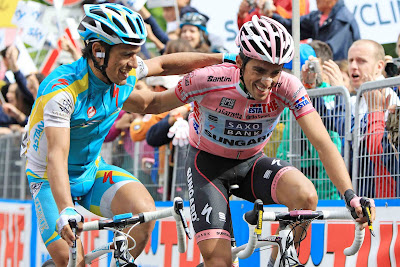 Tiralongo: "After a life (12 seasons) as a domestique, I’ve finally reached my goal of winning a race. My wife sacrifices so much for me to live this life as a cyclist.
It was Alberto who suggested to me to attack with six kilometres to go. He touched my shoulder to give me the signal. He had seen my motivation before. I had tried to go away once before. This was my only week of freedom. Otherwise, I always give 100% for my captains. I can imagine that 90% of the riders are very happy that I’ve won today after seeing me racing for my captains for such a long time. The first of them is Contador. When I saw him coming across to me, I saw a friend, not a rival. I knew he would do what he could to make me win this stage." 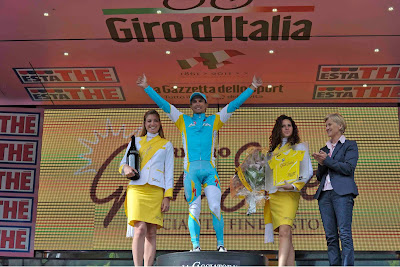 Stories for the Italian Cycling Journal about rides, granfondos, watching and touring during the Giro, having a good time cycling in Italy, Italian cycling history, etc. are always welcome. Contact me at veronaman@gmail.com. There are more than 1,900 stories in this blog. The search feature to the right works best for finding subjects in the blog. There is also a translate button at the bottom so you can translate each page.
Posted by Angelo senza la o at 4:11 AM