On the way to Peonis, the race paid tribute to Ottavio Bottecchia, who was found unconscious at this place on 3rd June, 1927 and died after twelve days in the hospital of Gemona del Friuli. 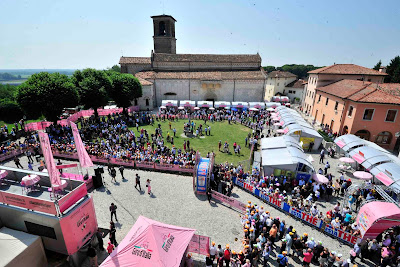 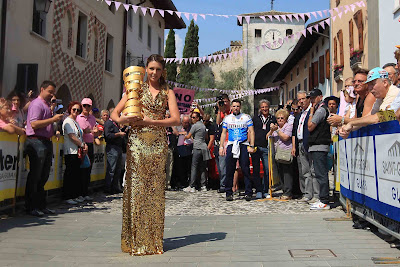 The field stop all escape attempts up to km 41 where 16 riders clear out: Sarmiento, Nocentini, Vicioso, Valls Ferri, Lewis, Losada, Spezialetti, Lastras, Samoilau, Kiserlovski, Noè, Vandewelle, Weening, Nordhaug, Meyer and Hoogerland. Average speed after one hour: 44.600 kph. At km 50 they have a lead of 1’46”.

Intermediate Sprint, Arta Terme (UD): Lastras first, Spezialetti second, Meyer third followed by the rest of the breakaway. The Saxo Bank – Sungard riders dictate the field’s pace and cross the IS at 3’12” back. With 100 km to go the gap of the 16-man break over the bunch is 4’45”. Average speed after two hours: 37.800 kph

King of the Mountain – 2nd category, Monte Croce Carnico Pass (UD) [m 1.360]:
Samoilau gets over the climb first, followed by Weening and the other 13 escapees. The bunch is at 5’06” behind. On the downhill Lastras speeds up but he is caught in the feed zone where the chasers, paced by the Euskaltel-Euskadi riders are gaining ground: 4’23”.

In the breakaway, on the uphill towards the next KOM, Kiserlovski goes off the front. 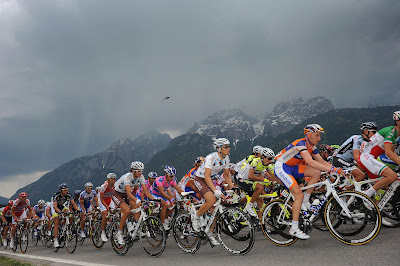 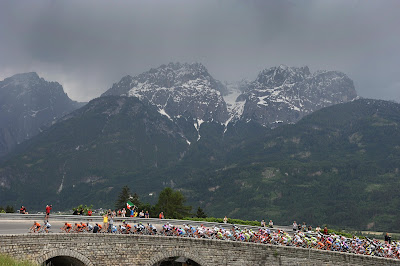 Along the climb, Sarmiento, followed by Weening, catch and overtake Kiserlovski, as the field is reducing the gap and reel in all the other escapees. 2 men are leading.

Sarmiento and Weening are caught with 10 km to go. Scarponi attacks with Rujano and Anton on his wheel. Contador cuts the gap down and, with 8,5 km to go, he speeds up with Rujano on his wheel.

With 2 km to go a snapshot of the situation: Rujano and Contador have a 1’05” lead over Dupont and Gadret, then Kiryienka and Anton; at 1’38” a group including Nibali and Scarponi. The two leaders work together. 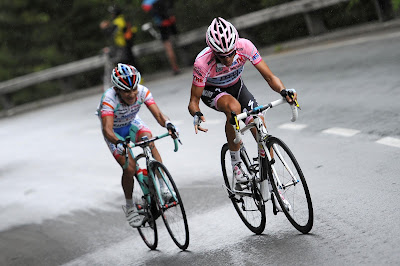 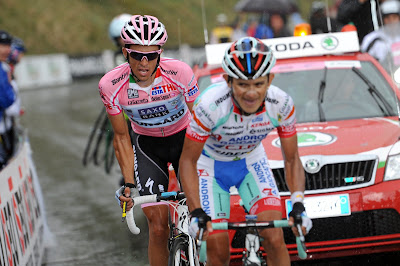 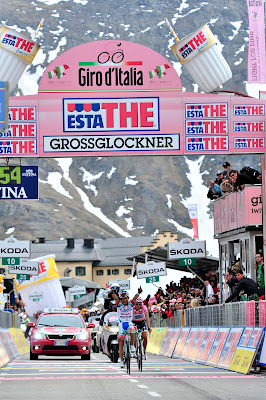 Rujano takes the win of this stage ahead of Contador who strengthens his lead on the Pink Jersey who now leads race by 3’29”. John Gadret in third at 1’27” back. Then Dupont and Anton at 1’29”, Kreuziger, Scarponi, Nibali, Kiryienka, Menchov and Arroyo loose 1’36”.

Nibali: ""There was nothing I could do against Contador. I tried to hang on to Contador but he had an extra gear and it was impossible. We tried to do what we could but it was pointless. I think everyone saw that. I don't think there is much else to say. Scarponi tried to attack him a few times and I tried to follow him but neither worked and he just rode away from us. We've got to try and come up with something but what? I'm not giving up yet. But we can only hope he cracks but he didn't today and this turned out to be a tough stage after all the climbing, the cold and the rain."

Scarponi: "I think that today my performance was better than the Etna one. I'm a fighter so I tried to perform the stage in a battling way: the two attacks were good, even if they didn't allow me to escape. Then, I understood that it was better to pedal on a regular pace". 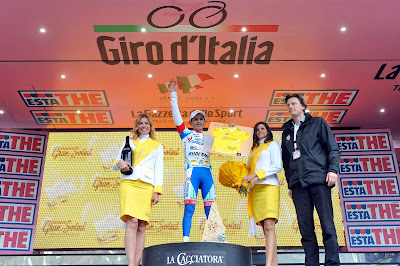 Stories for the Italian Cycling Journal about rides, granfondos, watching and touring during the Giro, having a good time cycling in Italy, Italian cycling history, etc. are always welcome. Contact me at veronaman@gmail.com. There are more than 1,900 stories in this blog. The search feature to the right works best for finding subjects in the blog. There is also a translate button at the bottom so you can translate each page.
Posted by Angelo senza la o at 4:41 AM