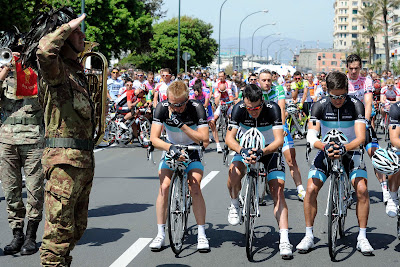 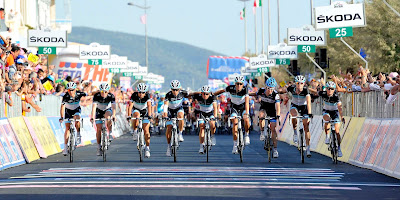 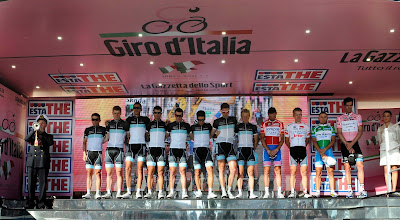 Stage 4, from Genova Quarto Dei Mille to Livorno, 216 km, was neutralized, paying tribute to Wouter Weylandt. All the teams took turns to pace the peloton for 10 km each. Finally, 3 km from the finish, Garmin–Cervélo with Maglia Rosa David Millar gave the signal to the Leopard–Trek riders to move to the front and cross the finish line in Livorno. Weylandt's close friend Tyler Farrar was invited to join the Leopard Trek riders out in front. Very, very sad.

The Leopard Trek riders and the leaders in the classification categories stood before an image of Weylandt winning stage three of the 2010 Giro. A lone bugler played the Last Call.

The start of the race began with a minute’s silence, marked by the military band that played a bugle tribute Weylandt.

It was a very, very sad day.

Following the will of the riders and the the Giro d’Italia, all the monetary prizes of today’s stage will go entirely to Wouter Weylandt’s family. Leopard Trek has announced the creation of a fund to help Weylandt’s partner, An-Sophie, who is due to give birth in September:
Dexia Banque International a Luxembourg,
69, route d'Esch,
L-2953 Luxembourg.
Account name:is Leopard SA ‘Wouter Weylandt’
Bank IBAN code is LU93 0020 6100 0904 0500, BIC: BILLLULL.

Stage 5, from Piombino to Orvieto, 191 km is rated "Media Montagna". The riders will encounter the white roads of Tuscany approximately 40 km from the finish. 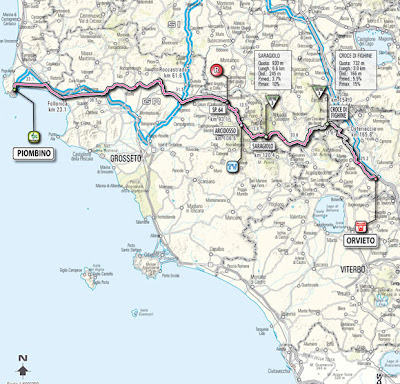 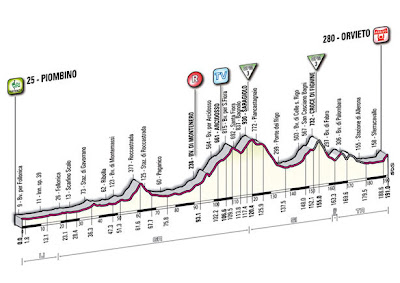 Stories for the Italian Cycling Journal about rides, granfondos, watching and touring during the Giro, having a good time cycling in Italy, Italian cycling history, etc. are always welcome. Contact me at veronaman@gmail.com. There are more than 1,900 stories in this blog. The search feature to the right works best for finding subjects in the blog. There is also a translate button at the bottom so you can translate each page.
Posted by Angelo senza la o at 4:05 AM