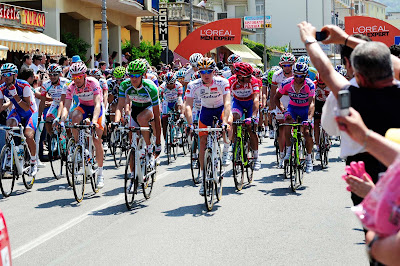 As the Quick Step and Htc – Highroad riders pace the peloton the gap stabilizes at approx. 10’. Average speed after one hour: 41.200 kph. Duarte from Geox – Tmc quits the race.

Intermediate Sprint, Vibo Valentia Marina (VV): Selvaggi gets first to the Sprint ahead of Giordani. The bunch, paced by Gretsch (Hct – Highroad) reaches it with a 2’45” delay. The bunch is speeds up strongly and catch Selvaggi and Giordani, who have kept the lead for 207 km, with 1500 metres to go.

– 2 km the short steep ascent leading from the sea to the town center begins.
Gatto is the one who accelerates and earns a few seconds, with Contador (who surprised all the GC contenders) at his heels.

FINISH
Oscar Gatto takes the stage win ahead of Alberto Contador. Third, Alessandro Petacchi who paces the field at 5” delay. Weening keeps the Pink Jersey. Contador's move gained him five seconds on the peloton and an additional 12-second time bonus, which moved him ahead of Scarponi and Vincenzo Nibali (Liquigas-Cannondale) in the overall standings. 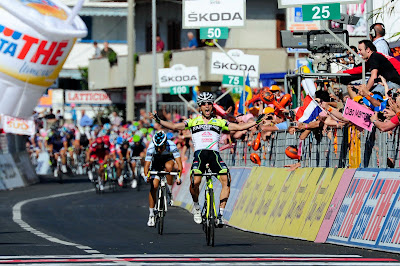 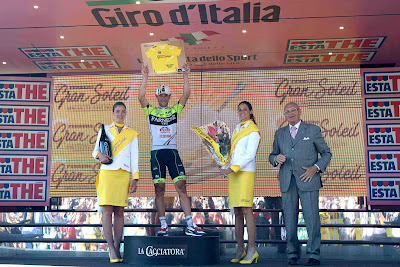 Stage 9, Messina-Etna, 169 km, is classified "Alta Montagna". The Giro arrives in Sicily, expect fireworks (and hopefully not from the volcano that has had some small eruptions in the last few days) from the GC contenders as they tackle Mount Etna twice. Nibali should be on fire on his native soil; he will be using a 53/39 x 11/23. 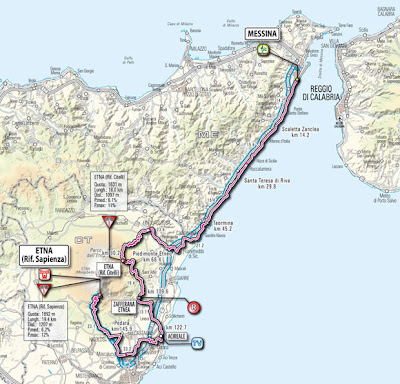 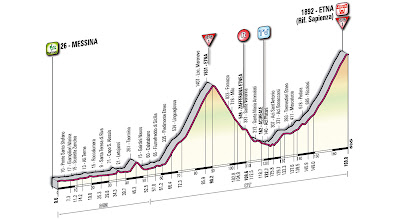 Stories for the Italian Cycling Journal about rides, granfondos, watching and touring during the Giro, having a good time cycling in Italy, Italian cycling history, etc. are always welcome. Contact me at veronaman@gmail.com. There are more than 1,900 stories in this blog. The search feature to the right works best for finding subjects in the blog. There is also a translate button at the bottom so you can translate each page.
Posted by Angelo senza la o at 4:55 AM