162 riders roll out at 1.25 pm. Right away a very high speed but the field is always together. 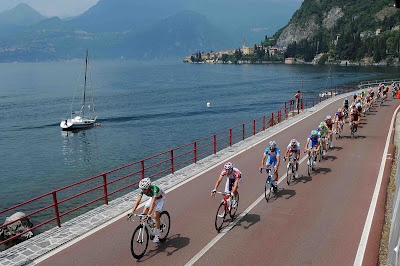 After 50 km from the start, the whole bunch is still together. Average speed after one hour: 53.100 kph. A number of attacks on the front of the field. Agnoli asks for a “time out”. Unheard. The accelerations keep on going. On the steep uphill leading to Bergamo Alta the peloton is split into three groups.

Intermediate Sprint, Bergamo: Bakelandts crosses the IS first ahead of Tankink and Pinotti who lead the first group (50 riders) including the Pink Jersey. The main bunch has a 1’ delay.

King of the Mountain, 2nd category : Passo di Ganda (BG) [m 1.060]: Pinotti first to come over the climb ahead of Capecchi, Seeldrayers, Brambilla 15” behind, Tiralongo 1’25” behind. The latter flies off in the pursuit of the front-runners on the phill. The Pink-Jersey group gets to the top 4’55” behind. On the downhill Tiralongo joins Brambilla but the three leaders cannot be caught and the victory is at stake between them.

Last km: a phase of mutual scrutiny among the three breakers - Pinotti has Seeldrayers and Capecchi on his wheel. From the last bend – 250 metres to go – Pinotti starts off the sprint. 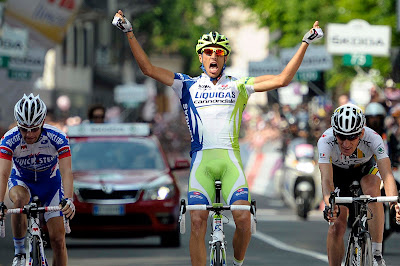 It is Eros Capecchi who passes and snatches the win ahead of Marco Pinotti, in second. Kevin Seeldrayers in third. In fourth and fifth, at 1’20”, Brambilla and Tiralongo respectively. The first victory for Liquigas in this Giro. 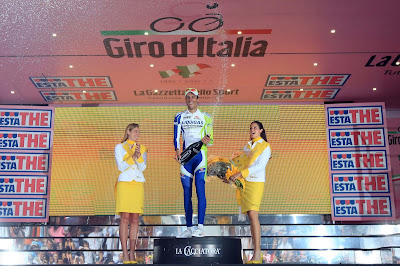 Capecchi: "I waited and tried for a long time now. To succeeded in the finish of a race is important, it's like a dream come true. Yesterday I tried to find the right breakaway group, unfortunately without success. I felt that my legs felt very well compared to previous weeks and today I threw myself into the race without hesitation. It's been a grind. The Ganda Pass was a perfect springboard for the group split up, then Seeldraeyers, Pinotti and I jockeyed to win. I chose the right time." 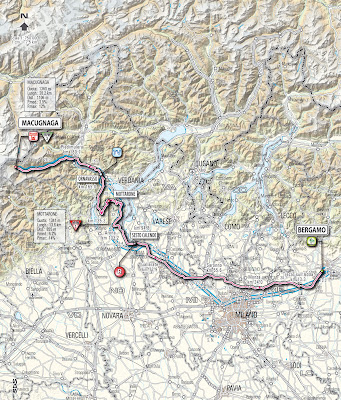 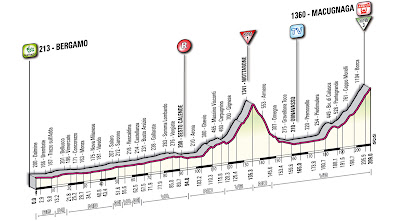 Stories for the Italian Cycling Journal about rides, granfondos, watching and touring during the Giro, having a good time cycling in Italy, Italian cycling history, etc. are always welcome. Contact me at veronaman@gmail.com. There are more than 1,900 stories in this blog. The search feature to the right works best for finding subjects in the blog. There is also a translate button at the bottom so you can translate each page.
Posted by Angelo senza la o at 6:00 PM