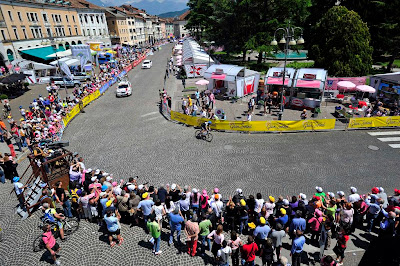 The stage was preceded by a minute's silence in memory of Xavier Tondo Volpini, the Spanish Movistar Team rider who died at home yesterday in a freak accident involving his garage door.

Faustino Muñoz, Contador's mechanic on Saxo Bank, was expelled from the race today. The Spaniard, already furious at the end of the Zoncolan stage with the fans along the climb for insulting and spitting on Contador, opened the car door on purpose to hit a spectator. 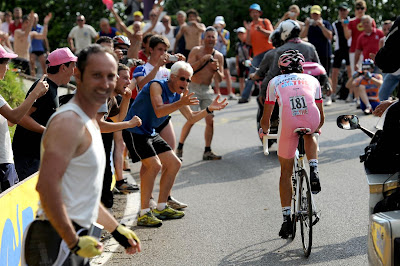 For this uphill TT Scarponi rode his Wilier Superleggera with a medium profile front wheel and a high profile rear wheel; gearing 50-36 with 11-27. 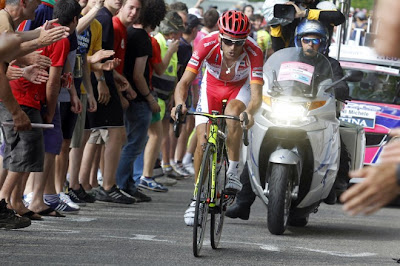 Once again Contador proved he is the strongest rider in the Giro, this time winning the TT by 34 seconds over Nibali and 38 seconds over Scarponi. It appears Contador has an insurmountable lead.

Nevertheless, the race for 2nd is an especially important one this year. At the moment only 47 seconds separate Scarponi (2nd) and Nibali (3rd). The elephant in the Giro is the "Contador Problem".

The Court of Arbitration for Sport (CAS) hearing will take place in June in Lausanne, a decision will be reached before the start of the Tour de France. If the Court of Arbitration for Sport decides in favor of the UCI, and if Contador receives a one year ban, all the victories back to July 21, 2010 would be stripped, including the 2010 Tour de France and this Giro d'Italia.

Stories for the Italian Cycling Journal about rides, granfondos, watching and touring during the Giro, having a good time cycling in Italy, Italian cycling history, etc. are always welcome. Contact me at veronaman@gmail.com. There are more than 1,900 stories in this blog. The search feature to the right works best for finding subjects in the blog. There is also a translate button at the bottom so you can translate each page.
Posted by Angelo senza la o at 4:13 PM