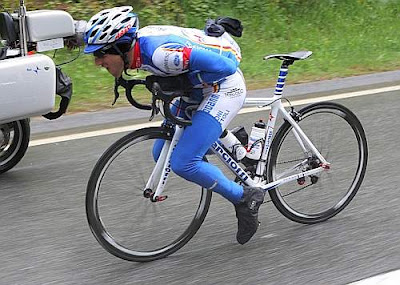 Lance Armstrong has been commenting quite a bit about the Giro descents, he's not enjoying them at all. What was in store is well known and was captured in the story "Steep Hills, Skinny Tires and Guts" (http://italiancyclingjournal.blogspot.com/2009/05/giro-steep-hills-skinny-tires-and-guts.html).

The essence of that story, "Of all feats in sports, few are as harrowing as this: Carving down a mountain at 60 miles per hour in a pack of 15-pound bicycles with tires as wide as a roll of Scotch tape, while wearing only a thin layer of lycra. Hitting the brakes can send a rider flying, and a mistake in the wrong place can lead to death."

How many risks you take depends upon how much you want to win. It's obvious that Armstrong has considered the equation and isn't willing to take the risks that others are.

Today we saw the oldest rider in the peloton, Alessandro "Kamikaze" Bertolini Bertolini (above), taking incredible risks while descending on wet roads to try to win a stage (he didn't succeed). Only a few months ago Alessandro Bertolini risked his career and more, falling during a sprint in the GP in Camaiore. Racing downhill at crazy speeds on the Maloja, Simoni’s team-mate, who won the Cesena stage one year ago, ran the risk of providing an encore. "I knew that descent very well,” said Bertolini, who lives in Dosso, near Rovereto. “I led Gibo ahead of the group, then I saw that nobody was behind me so I went for it. Unfortunately, they caught up with me, but the important thing is to be there when it counts, and I want to win a stage."

Some of Armstrong's comments about the last two stages:

Stage 7: "Done with stage 7. I've seen it all now. 25 mile fast decent to the finish. In the pissing rain. 55 mph. Makes no sense. The boys in the bunch are.... Why always talk about the "health" of the riders then ignore it when it comes to safe courses?"