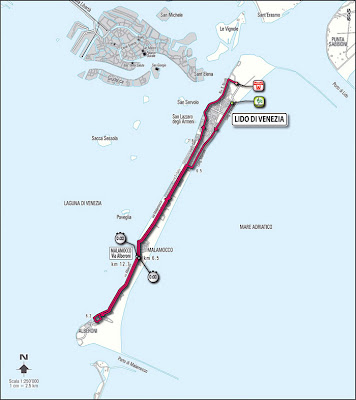 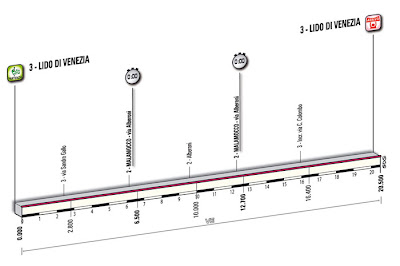 The first team will start at 1535 local, last team 1720. There is a 5 minute interval between the start of each time.

Start order:
1 TEAM COLUMBIA - HIGH ROAD
2 RABOBANK
3 BARLOWORLD
4 GARMIN - SLIPSTREAM
5 AG2R LA MONDIALE
6 S.DIQUIGIOVANNI - ANDRONI GIOC.
7 BBOX BOUYGUES TELECOM
8 XACOBEO GALICIA
9 SILENCE - LOTTO
10 ACQUA & SAPONE - CAFFE' MOKAMBO
11 QUICKSTEP
12 LIQUIGAS
13 FUJI - SERVETTO
14 CERVELO TEST TEAM
15 TEAM SAXO BANK
16 TEAM KATUSHA
17 ISD
18 TEAM MILRAM
19 LAMPRE - NGC
20 CAISSE D'EPARGNE
21 LPR BRAKES - FARNESE VINI
22 ASTANA
Stage 1 official description:
The utterly unique magic of the enchanted city of Venice, universally recognised and admired for its exceptional beauty, is the setting for the start of the 92nd Giro d’Italia and the race’s celebration of its first 100 years. And the race starting in Venice has its finish line in Italy’s capital city, Rome, which together with Venice forms a marriage of monumental, architectural, historic and artistic nobility that cannot be equalled anywhere else in the world.
There are many, many world-famous monuments and attractions in Venice, and it is basically impossible to try and condense even a simple list of the main ones in just a few lines. This incredible city of the sea is built on over a hundred islands; it has a similar number of canals, over four hundred bridges and just one piazza, the celebrated St. Mark’s Square, symbol of the city with St. Mark’s basilica, the campanile (bell tower) and the surrounding historic monuments testifying to the historic power of the Most Serene Republic. St. Mark’s Square is at the end of the Grand Canal, which is the city’s largest internal waterway, and along its banks are the most famous palaces of the Venetian nobility, alternating the repertoire of various styles fused in the peculiar and elegant Venetian architectural language in a parade of marvels. Terra firma is four kilometres away, the open sea two kilometres and, between them, the Venetian Lagoon.
It seems impossible even to imagine bicycles in this enchanted, breathtaking place. But in fact, Venice boasts a golden dawn of excellence with the Giro d’Italia.
Venice’s Lido, a twelve-kilometre-long sandbar forming part of the littoral barrier that separates the sea from the lagoon and just one and a half kilometres from St. Mark’s Square, is the Venetian island that has the closest associations with cycling. Venice’s Lido is where the 1997 Giro started, and its first stage was won by Mario Cipollini (naturally with a sprint finish).
A true masterpiece of organisation and daring, designed by the race’s patron Vincenzo Torriani, was the 14th stage of the Giro in 1978. This was an individual time trial of 12 kilometres through Venice’s narrow streets, over its bridges and along its canals, starting in the Venetian town of Marghera and finishing in St. Mark’s Square, with a bridge built on barges 400 metres wide, spanning the Grand Canal from the Basilica di Santa Maria della Salute to St. Mark’s Square. An almost regal one-two-three with Francesco Moser the winner, Giuseppe Saronni second at 14” and the Swedish specialist Knudsen third at 15”. It was an unforgettable event. Another starting line for the Giro d’Italia in Venice was in 1972. The first stage started in Mestre (a city on the shores of the lagoon, governed by the Municipality of Venice and the nearest thing Venice has to modern suburbs), and the finish was in Ravenna, won by Marino Basso and with Franco Bitossi coming a close second. The great Belgian sprinter Rik Van Steenbergen prevailed in the stage starting in Riccione (near Rimini) in 1952, coming in ahead of Kubler and Bartali after winning the Brescia-Venice the previous year (1951), beating Venetian Toni Bevilacqua. An inspired sprint from Luigi Casola won him the Pesaro-Venice leg in 1949, and another sprint finish resulted in Roman Pietro Chiappini’s success in the 1939 Bologna-Venice, as he pipped a skilled sprinter like Di Paco.
But the Giro d’Italia’s first time in Venice was in 1936, when it hosted the finish of the time trials starting in Padua. Victory went to the elegant Ligurian long-distance rider, Giuseppe Olmo.The stopwatch will once again be the judge at the 2009 team trial which will see formations dart along the flat roads of Venice’s Lido, famous for its Venice Film Festival, the Casino, and the prestigious hotels strung along the elegant beach, and taking in the villages of Malamocco and Alberoni at the Lido’s southern end.
The stage is set for a beginning where, for just over twenty kilometres, the emphasis will be on great speed and synchronisation as participants seek to secure that first, highly-coveted pink jersey.
After the Giro we'll get back to "regular programming": everything from A to Z about Italian cycling. Stories, including cycling trip stories, for the Italian Cycling Journal welcome; contact veronaman@gmail.com.