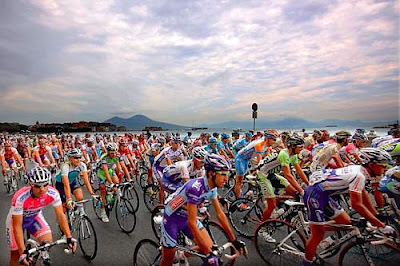 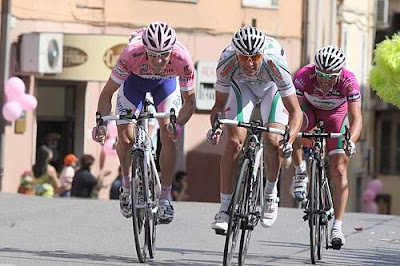 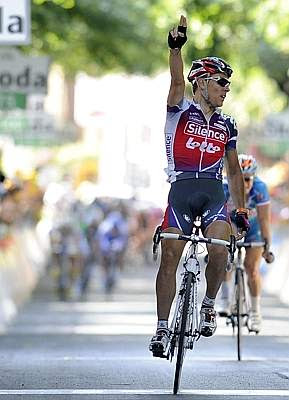 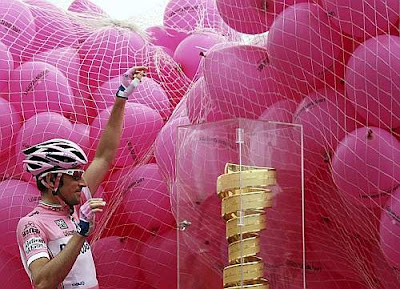 ANAGNI (Frosinone), 30 May 2009 - Philippe Gilbert has won the 20th stage of the Giro d’Italia, 203 kilometres, Naples to Anagni, with a strong attack one and a half kilometres from the finish line. For the Belgian racer of the Silence-Lotto team, 26-years old, this is the first victory this season, and the 20th in his career: he clearly beat the French rider Thomas Voeckler (by 2 seconds) who had attempted to keep up with him. Third, at + 7, was Stefano Garzelli.

GENERAL RANKING — Denis Menchov (Rus, Rabobank) gained an additional two seconds on Danilo Di Luca as a result of his sprint finish in Frosinone and now has a margin of 20 seconds with only the 14.4 kilometres of the time trial in Rome to go. Third is Pellizotti at +1:43; fourth is Sastre at +2:44; fifth is Basso at +3:37.

THE DETAILS — The race is now naturally centred around the battle between Menchov and Di Luca for the pink jersey, and thus, there was no room for the breakaway. The peloton caught up to Forster (Milram), Swift (Katusha), Cardenas (Barloworld), Gomez Gomez (Fuji), Lastras (Caisse d'Epargne), Lund (Saxo Bank), De Bonis (Diquigiovanni) and Bonnafond (AG2R) shortly before the sprint finish in Frosinone, where Di Luca tried to gain a 6-second time bonus. But Menchov was ahead of him and only Petacchi managed to cross before the Russian who, in any event, gained 4 seconds, while Di Luca took third place and the related 2 seconds. The Russian racer for Rabobank now has 20 seconds on Di Luca. And all the other attempts, even in the final lap in Anagni, were nothing but a prelude to an exciting finish.

TOMORROW — The spectacular conclusion of the 100th anniversary of the Giro d’Italia – 92nd race – with a 14.4 km individual time trial in the heart of Rome where the awards will be given by the President of Italy Giorgio Napolitano. Starting from Fori Imperiali the pink jersey will bike to the Quirinale square with all the other racers for a moving ceremony unique in the history of the Giro d’Italia.

After the Giro we'll get back to "regular programming": everything from A to Z about Italian cycling. Stories, including cycling trip stories, for the Italian Cycling Journal welcome; contact veronaman@gmail.com.
Posted by Angelo senza la o at 11:40 AM