Stage 2: Petacchi Makes a Present of a Sprint Finish 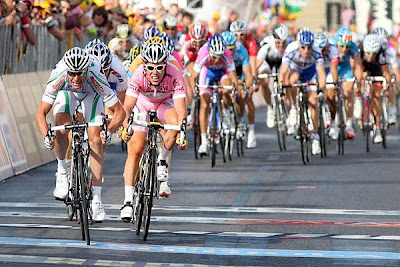 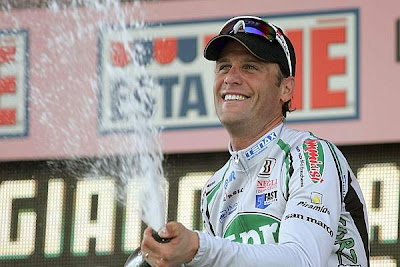 TRIESTE, 10 May 2009 — Alessandro Petacchi has won the second stage of the Giro d’Italia from Jesolo to Trieste (156 km). The 35 year old LPR-Farnese rider beat race leader Mark Cavendish (Columbia) in a sprint finish, though Cavendish holds on to the pink jersey. On the day of his son Alessandro’s first birthday, Petacchi’s progression was superb and he managed to hold off Cavendish’s fight-back to achieve his 8th success of the season (just like Cavendish) and his 20th stage victory in the Giro d’Italia. Also on the podium were Swift (GB, Katusha), followed by Davis, Farrar, Gatto, Gavazzi and Viganò.

EMOTION — “I’ve been planning for three days how to beat Cavendish”, said Petacchi, fresh off the saddle, to Italian national television, “and I managed to execute my scheme to perfection. A kiss to my baby boy at home”.

THE RACE — An early breakaway by Leonardo Scarselli (ISD), who is to be praised for his effort. German rider Russ (Milram) falls and, after being taken away in an ambulance, is the first casualty of this year’s race. Gilbert, Pozzato and Gasparotto attempt a split towards the end, but it comes to nothing and they are caught by the pack before the inevitable final sprint.

TOMORROW — The 92nd edition of the 100 year old race proceeds tomorrow with the third stage from Grado to Valdobbiadene (198 km), starting out at 12.35 and finishing at approximately 5.15. A flat first section is followed by an undulating second part with a third category King of the Mountains climb at Combi, about 40 km from the finish line. A sprint finish is likely (but not certain) on the eve of the first uphill arrival at San Martino di Castrozza.

Petacchi sets his sights on the pink jersey: "Tomorrow it could be mine". After his success in Trieste the Milram sprinter looks for a repeat performance in Valdobbiadene: "It costs nothing to dream".

“I TOLD YOU SO” — "This morning on the bus I told my team mates to lead me over the hill and that I would take it from there”, said Petacchi at the end of his 20th stage victory in the Giro and the 150th of his career (net of his disqualification in 2008 over the Salbutamol incident). “I’d been thinking about this sprint for some time. It’s my son’s first birthday today and I made that gesture (Petacchi put his hand to his head, ed.), because when we ask him where he keeps his thoughts that’s what he does. My victory is for him”.

PINK DREAMS — First blood in the ring with the cornered pink jersey holder Cavendish thus goes to the man from La Spezia. "I know that Mark doesn’t take off quickly in sprints”, said the 35 year old Petacchi, who has enjoyed 8 stage victories so far this year. “That’s why I moved early, 250 metres from the line, maybe even before that. I was less tired than in previous years and I’m even doing well on the climbs, so I’m hoping for a repeat performance tomorrow. And then ... well, it costs nothing to dream. If I win and Mark falls back, tomorrow night the pink jersey could be mine”.

IN THE MEANTIME, LANCE — Up till Tuesday next the pink jersey will remain the property of the sprinters. Cavendish has a 16" advantage over Farrar (today Team Garmin did everything it could to move closer to the Englishman) and Petacchi, both of whom are hoping for a 20" time bonus to wrest the pink jersey from the High Road rider. But the classifica avulsa (a sort of imaginary classification involving only the big names and race favourites) is also warming up. Armstrong heads the list with 9" over Di Luca, 13" over Leipheimer, 25" over Menchov, 27" over Pellizotti, 29" over Cunego ad Bruseghin, 36" over Sastre and 40" over Basso (slowed down by a fall, like Levi). "The risk in the first stages of the big tours is great, especially when you have ‘crazy circuits’ like this one. This is why I tried to stay up front”, said the Astana cowboy, who has gradually crept up the classifica to become its leader.

After the Giro we'll get back to "regular programming": everything from A to Z about Italian cycling. Stories, including cycling trip stories, for the Italian Cycling Journal welcome; contact veronaman@gmail.com
Posted by Angelo senza la o at 4:16 PM