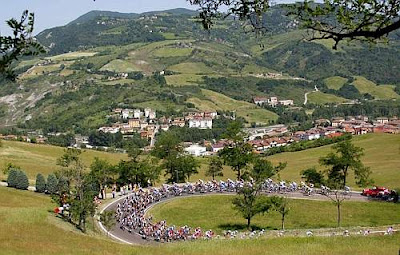 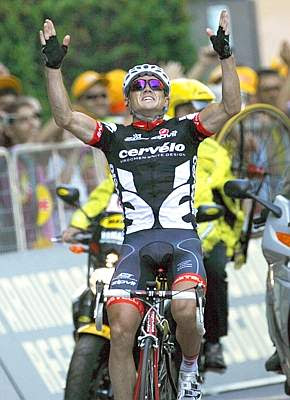 BOLOGNA, 23 May 2009 - Simon Gerrans (Aus, Cervelo) has won the 14th stage of the Giro d’Italia, from Campi Bisenzio to Bologna, 172 kilometres. On the difficult final climb in San Luca (2 km at even 16%) Gerrans, winner of the Prato Nevoso stage of the Tour de France in 2008, left behind all the riders that had sprinted with him, and crossed the finish line with his arms high. Second, at +12 was the Swiss rider Rubens Bertogliati (Diquigiovanni-Androni); third was Francesco Gavazzi (Lampre-NGC) at +19.Then came all the other members of the sprint. At +1:04 came the top riders: only Basso and Leipheimer lost something – 3 seconds. Rogers lost 6 seconds. Further behind were Cunego, Simoni and Armstrong.

THE DETAILS — Chainel, Meyer, Renshaw, Cavendish and Pozzato did not take off. The Italian had a problem with his knee, while the Briton – after three stage victories – had planned to withdraw to prepare for the Tour. After 12 km a sprint was launched by Bonnafond (Ag2r), Cheula (Barloworld), Froome (Barloworld), Kiryienka (Caisse d'Epargne), Deignan (Cervelo), Gerrans (Cervelo), Visconti (ISD-Neri), Grivko (ISD-Neri), Gavazzi (Lampre-NGC), Reda (Quick Step), Bertogliati (Diquigiovanni), Petrov (Katusha), Müller (Milram), and Vorganov (Xacobeo). The pace setters – along a route with 4 Mountain Gran Prix – gained a margin of up to 5 minutes: a convenient situation for the pink jersey Menchov, because Di Luca and the other rivals were cut off from the possibility of gaining time bonuses on the San Luca. The Italian from LPR-Farnese drove ahead, attempting to reduce the lead, but the other teams did not help. On the last Mountain Gran Prix before the finish line (minus 23 km) the group had 1:45 to recover. At minus 15 km, the advantage increased to 1:53. There was nothing the peloton could do and the sprinters went on to battle for the victory. And Grivko was the first to attack on San Luca, which has sections of 16% that Armstrong described as "insanely steep", before the final scrimmage.

TOMORROW — The 100th anniversary of the Giro continues with the 15th stage: from Forlì to Faenza, 161 kilometres. A very difficult stage with 4 Mountain Gran Prix: the final stretch contains Casale and Trebbio. It could the right day for a long sprint to the finish, and even one of the top riders could be tempted.

After the Giro we'll get back to "regular programming": everything from A to Z about Italian cycling. Stories, including cycling trip stories, for the Italian Cycling Journal welcome; contact veronaman@gmail.com.
Posted by Angelo senza la o at 12:09 PM