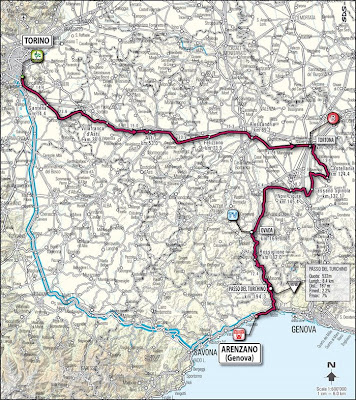 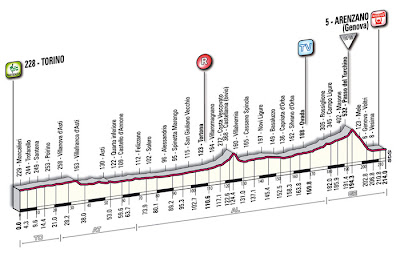 Wednesday, 20 May, 2009, Stage 11 official description:
The tour continues from the capital of Piedmont, a city that featured in the first ever Giro, concluding in Arenzano, very close to Genoa. The latter, known as the Superba, also hosted a stage in the 1909 Giro d’Italia.Noble Turin, beautifully located among the hills with the River Po crossing the open and spacious urban area, has numerous interesting features. Unique high-profile qualities that have manifest themselves in terms of history, art, culture, architecture, customs, the economy, sport and food throughout the ages. The city has had a long relationship with the Giro d’Italia, so much so that producing a succinct statistical summary of the stages and the stories relating to Turin is impossible. The city also boasts the classic Milan-Turin, the longest in-lane race having first been held in 1876, and the Giro del Piemonte. For years, both of these races have been organised by La Gazzetta dello Sport. Also not to be forgotten is the glorious track in the Motovelodromo named after Fausto Coppi in Corso Casale.

And it is the heart of Turin – the large Piazza Castello with its monumental and historic buildings – that will welcome the multicoloured pink jersey group. Through the city before heading towards Moncalieri, Cambiano and then the province of Asti, known above al for its agricultural production, Muscat wine and the sparkling wine of the same name. It then goes through the town of Asti, home to dramatist Vittorio Alfieri and Giovanni Gerbi, one of the pioneers of Italian cycling, a powerful rider known as the “red devil” because of the colour of the jersey he used to wear, who was born here in 1885. The stage then moves through the province and town of Alessandria, and then into the “land of the greats” with the important centre of Tortona, the crossroads of Castellania where Fausto and Serse Coppi were born and now rest, Villalvernia, Cassano Spinola – a town associated with Andrea ‘Sandrino’ Carrea – and the nearby Novi Ligure, hometown of Ettore Milano. The latter two were both powerful support riders of Coppi’s (as well as others). Novi Ligure, with its ‘Museo dei Campionissimi’ museum, established and run with great passion and zeal, is also associated with the name of Costante Girardengo, the first great rider to add the superlative ‘issimo’ to the word for legend or champion, ‘campione’.

After Ovada and entry into the province of Genoa, on the roads of the Milan-Sanremo race, the riders go through the Turchino Pass around 20 km from Arenzano. Then it is on to the Ligurian Sea and then Genoa-Voltri. Arenzano follows straight after. This town hosted a stage back in 1925, also beginning in Turin. Two hundred and seventy-nine kilometres with a practically regal first three of Girardengo, Binda and Brunero. It was also a stage finish in 1975, this time Franco Bitossi sprinting to victory ahead of Paolini and Lasa.

This coastal town on the Riviera di Ponente, located in an inlet to the west of Genoa, to which it is closely linked for various matters, has a very particular landscape. Indeed, located within the Beigua Regional Park, it is notable for the areas of mountain that sit directly on the coast, with minimal distance between the sea and the Ligurian Apennines.

The Sanctuary of the Infant Jesus of Prague is a popular place of interest whilst, architecturally speaking, the Villa Negrotto Cambiaso with its park and greenhouse, and other liberty buildings are also notable. The town’s economy is based primarily on beach tourism, with natural, cultural and recreational activities. Attractions include the sea floor between Arenzano and Punta Invrea with its interesting marine flora and fauna, the International ‘Mare e Monti’ Walk that attracts participants from various nations, the underwater gym (the first in Italy) for exercise and training, the water courses and climbing activities at Cü du Mundu, the walk that links it with Cogoleto, with a cycle route named after singer Fabrizio De André that runs along the site of the old railway.

The town coat of arms features a palm tree and the sea with a scroll bearing the Latin motto Hic manebimus optime which, appropriately for Arenzano, means “here we will stay excellently”. The name of the town also derives from a Latin word meaning “healthy air”.