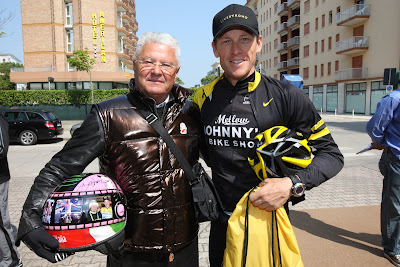 Fabio Saccari is the motorcyclist that has been carrying, for 32 years, famous Italian bike race photographer Roberto Bettini. He was killed in an accident with a truck this morning in Madonna dell’Olmo, near Cuneo, where he was traveling to for the start of today's Giro.

He was well known by everyone, from journalists to cyclists as this was his 32nd Giro d'Italia. He was also good friends with Lance Armstrong having survived cancer himself.

The Giro will observe a minute of silence at race start tomorrow in Torino.

Our condolences to his family.
Posted by Angelo senza la o at 5:22 AM

Email ThisBlogThis!Share to TwitterShare to FacebookShare to Pinterest
Labels: Saccani