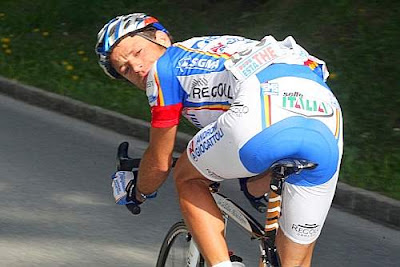 MAYRHOFEN IM ZILLERTAL (Austria), 14 May 2009 – They took off like a shot, at extreme speeds, exhausted beyond all expectation. This is the sixth stage of the Giro in brief, a stage raced at an average of 42.524 km/h with a sprint that started at kilometre 5 and Michele Scarponi’s win. For the Italian climber, suspended for 18 months in 2007 due to his involvement in Operacion Puerto, this is his first career victory and his third in 2009 if you count the Tirreno-Adriatico race. "It was really hard work. When I saw the sign that said 55 km from the start I thought, ’I’m never going to make it. But I rode 193 kilometres and it feels great. I thought I would have this satisfaction at Monte Petrano, but it came early".

20 PINK JERSEYS — The best riders of the day included Stefano Garzelli (a good 7 attempts to break away), and Filippo Pozzato, fourth across the finish line. The top riders controlled themselves, even though not everything went as expected. "I expected a less tiring stage, and I wasn’t the only one,” admitted Danilo Di Luca. “I hope tomorrow's sprint will be 10-15 minutes, so we can relax". The rider from Abruzzo, who has accumulated 20 days in the pink jersey over his career, said more. “What Cunego said about the rankings being rewritten in hindsight? I don’t think he was talking about me, seeing the relationship I have with Damiano. He could have avoided it though..." On the market, "It’s early to talk about that. For now let’s think about racing in the Giro and in 2010 we’ll think further ahead".

"At 110 KM PER HOUR” — Basso finished among the best and with a smile on his face. "One less day till we reach Rome, and I feel good. I’m confidently looking forward to the stages that will decide the Giro". After the "shock" of yesterday’s race on the Alps of Siusi, Lance Armstrong lost another 39 seconds. "At some points going downhill today we reached 110 kph. That was the craziest last 30 km I’ve ever seen. I wonder what’s the point. Tomorrow the finish is similar; it seems more like a MotoGP race than a cycling race".