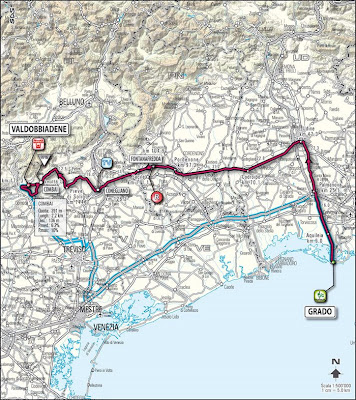 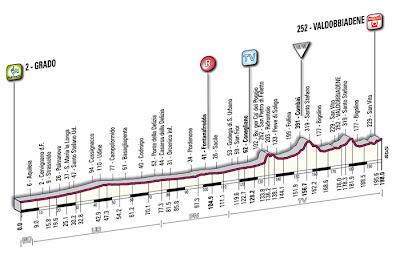 Monday, 11 May, 2009, Stage 3 official description:
Grado is the starting line for the third stage. This is another stage that, with its technical features and altimetry, is expected to bring out the best in sprinters. In this stage the finish line comes to Valdobbiadene, in the province of Treviso, for the first time ever.

Grado, in the province of Gorizia, is made up of the old town centre on an island between the sea and the lagoon, with narrow winding streets and little squares studded with monuments and buildings of architectural and historic significance, like the cathedral of Sant’Eufemia, the Baptistery and the small basilica of Santa Maria delle Grazie, all of which bear witness to the town’s ancient status as the seat of the Patriarchate of Aquileia. Also of note is the sanctuary of Santa Maria di Barbana, on the island of Barbana and a pilgrimage site.
The lagoon of Grado is the north-eastern terminus of the Adriatic system of lagoons and is made up of canals, dunes, valleys, and islets (locally known as “mote”) with their traditional “casoni” (huts made of straw and reeds) and which are home to the local fauna and flora.

The modern part of Grado extends along the town’s famous beach. The Latin name for the area, Ad Aquas Gradatas, comes from the gentle slope of this beach. Grado’s sandy shore has long been famed and appreciated, along with the marine spa: together they resulted in the development of this elegant seaside resort, which is internationally famous for its tradition and quality.

The wine and gastronomy offered in this area are of equally high quality.

Grado is the home of the famous Venetian dialect poet, Biagio Marin.

Aquileia with its relics of ancient history, Palmanova with its military-inspired polygonal star fort layout, the regional capital Udine, with various attractions, Campoformido where, at the Villa Manin di Passariano, the Treaty of Campoformido was signed in 1797 between Napoleonic France and Austria, effectively bringing the Venetian Republic to an end. Then comes Codroipo and the Rivolto airbase, home of the Italian air force’s aerobatics team, the Frecce Tricolori (Tricolour Arrows). The route crosses the province of Pordenone, passing through Casarsa della Delizia and Pordenone Sacile, and we enter the region of Veneto through Ponte della Muda in the province of Treviso. In this area, cycling in all its guises is part of the local history, customs and daily life. It is an industrious area, rich in historic, cultural and economic values that are well-developed and varied. From Conegliano the route continues along the world-famous Strada del Vino Bianco (White Wine Road) to Refrontolo, Pieve di Soligo, Follina, Miane, and then the well-known hill of Combai and the first of two crossings through Bigolino and Valdobbiadene. The finale is slightly undulating, and its wonderful backdrop is a view of the famous vine-covered hills that produce the famous and rightly celebrated prosecco sparkling white wine, with excellent restaurants serving the exquisite wines together with perfectly-selected gastronomic delicacies. One very exclusive local wine is produced only in a restricted and very well-defined part of Valdobbiadene: Cartizze, an exceptionally sought-after sparkling wine.

As well as the principal local activity of making quality wines, there are also various industries of note. And the backdrop is in a green and idyllic natural environment, extending from the Alpine foothills to the Piave river basin. The urban centre offers many sights of interest.

So, toasts of particular excellence are assured for Valdobbiadene’s first appearance in the Giro d’Italia!

After the Giro we'll get back to "regular programming": everything from A to Z about Italian cycling. Stories, including cycling trip stories, for the Italian Cycling Journal welcome; contact veronaman@gmail.com.
Posted by Angelo senza la o at 4:38 PM