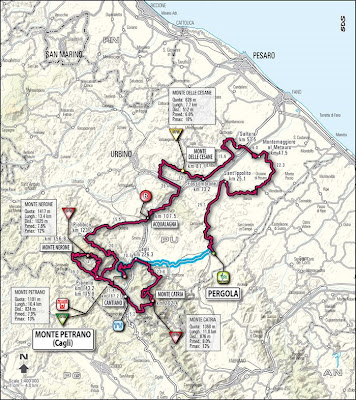 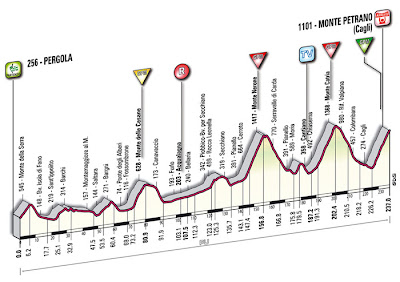 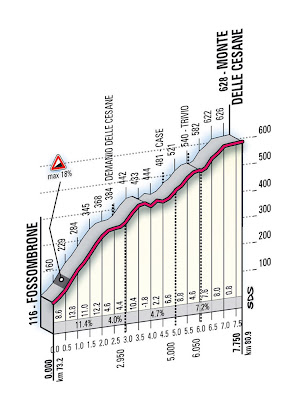 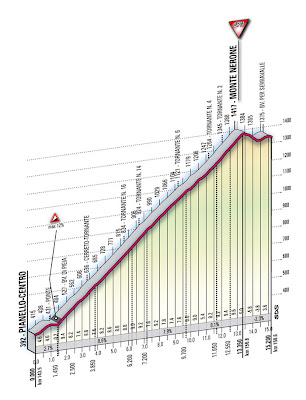 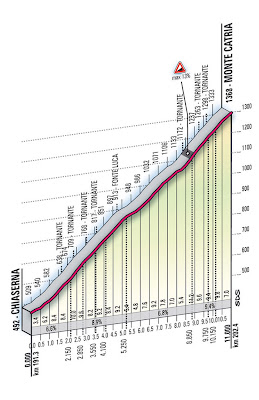 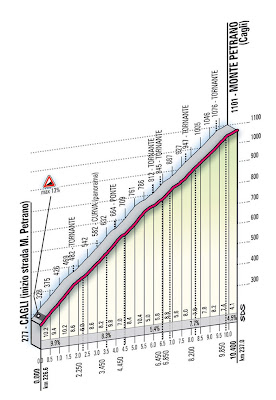 Monday, 25 May, 2009, Stage 16 official description:
An important and technically demanding stage at this year’s Centenary Giro d’Italia, which takes place almost entirely in the province of Pesaro-Urbino, a municipality that, in recent years, has regarded cycling, and the Giro d’Italia in particular, as an excellent vehicle for promoting and raising the profile of the local area and its merits. The stage kicks off in Pergola, a charming little town immersed in the typical hilly countryside of the valley of the Cesano River, close to the slops of the Catria massif, just over 30 kilometres from the Adriatic coast. It has a long history and, in 1860, was the first city in the Marche region to rise up against the temporal power of the Pope and be annexed to the kingdom of Italy. The 14th century former convent of San Giacomo in Pergola is home to the Museo dei Bronzi Dorati (Museum of Gilded Bronzes) which, opened in 1999, boasts the only series of existing gilded bronzes from Ancient Rome, as well as finds, artefacts, sculptures, paintings and various objects from various eras and graphical works by Pergola’s Walter Valentini, a renowned exponent of lyrical abstraction. Also of great value are the Angel Dal Foco theatre and other buildings such as the Church of Santa Maria di Piazza, the town hall and the cathedral. Local food and drink has an authentic edge with truffles and pasta dish ‘vincisgrassi’ washed down with local red wine, ‘visciolata’, a dessert wine made with the sour black cherries typical of the zone, and a renowned passito.

The route then takes the cyclists to Saltara, another cycling-mad town where, in 2003, Paolo Bettini won his first Italian championships and in 2006 Rik Verbrugghe won the Giro d’Italia stage. It is then onto the important industrial town of Fossombrone, the climb of Monte delle Cesane and the downhill stretch to Furlo with its well-known gorge of the same name, Roman tunnel, dam and lake, before arriving at Acqualagna. Throughout the zone this town is known as the capital of the truffle, the choice bulb that characterises the local cuisine and economy. In 1906 the town was birthplace to Enrico Mattei, partisan commandeer and great businessman. Piobbico with its “ugly association”, Pianello and then the demanding climb at Monte Nerone. Downhill towards Cantiano, the ancient medieval centre known for its black cherries conserved in syrup, then a climb at Monte Catria and the challenging and tortuous descent at Cagli. This attractive little town is located on a spur of Monte Petrano and is distinctive for its imposing Torrione, striking central piazza and other buildings of architectural value. It is also rich in cultural traditions and customs in various areas. The theatre is a focal point. It is a relaxed holiday destination and its events include the national “Distinti Salumi” cooked meats festival. The name of the event hints at its primary focus and a well-known delicacy of the area. The race is not yet finished though. There are still around ten kilometres to go, uphill all the way and truly spectacular, alongside the mountains with a magnificent view of the valley. The finishing line is located in an open plateau that allows you to broaden your view across a vast and eye-catching natural panorama, peaceful and unique in its beauty.

Those with an eye on the pink jersey will have to give their all in this key stage against the natural backdrop of the Marche Apennines. A new route that will certainly have a major impact on the Centenary Giro d’Italia.


After the Giro we'll get back to "regular programming": everything from A to Z about Italian cycling. Stories, including cycling trip stories, for the Italian Cycling Journal welcome; contact veronaman@gmail.com.
Posted by Angelo senza la o at 2:53 PM