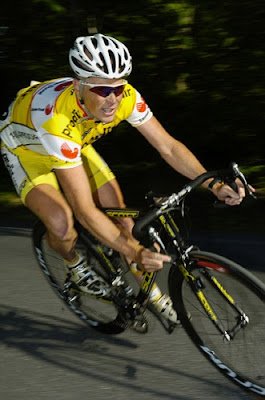 This year, the major contenders for the overall win at the Giro d'Italia, the elite stage race that began Saturday, are Italy's Ivan Basso, Levi Leipheimer of the U.S. and Italy's Damiano Cunego. All three are closely matched, setting the stage for one familiar difference maker in the Giro: The descent.

Of all feats in sports, few are as harrowing as this: Carving down a mountain at 60 miles per hour in a pack of 15-pound bicycles with tires as wide as a roll of Scotch tape, while wearing only a thin layer of lycra. Hitting the brakes can send a rider flying, and a mistake in the wrong place can lead to death.

"The worst thing you can do is start thinking about the 'what ifs,' " says Frankie Andreu, a former professional cyclist and Tour de France commentator for Versus.

Cyclists say the true key to descending is, basically, to adopt a certain sense of fatalism. Most expect to eventually take a spill going extremely fast downhill, and some even practice falling correctly to avoid broken bones. The unknown variable is guts -- that sense of invincibility that gives professionals who started when they were fearless teenagers a distinct advantage.

"It's a question of courage," says Sean Yates, a former professional cyclist and now a director of the Astana cycling team.

At no major race is the art of descending on a bicycle more important than at the Giro. The Tour of Italy's steep, narrow slopes, often filled with potholes, gravel and oil, are treacherous to descend. The steep grades of 9% or greater tend to give smaller riders an advantage going up, but the most daring riders an advantage going down. The Tour de France, by contrast, has more gradual climbs and more sweeping turns, the result of more modern road construction. The fact that the Giro is held in May means there are chances of extremely cold weather, even snow, on the course's mountain passes.

"It's an amazingly important aspect of cycling," says Jonathan Vaughters, director of Team Garmin-Slipstream, which is racing in the tour of Italy.

This year's Giro, a tradition that began 100 years ago, isn't as mountainous as usual. The organizers opted for fewer of the climbs that are its trademark. And with last year's winner, Spaniard Alberto Contador, gone, the field is wide open. Lance Armstrong, recovering from collar bone surgery, says he is there to help out Mr. Leipheimer, his teammate, who finished second last year.

The Giro's best descender in a generation was Paolo Savoldelli, known for his almost suicidal downhill drives. Mr. Savoldelli famously made up time on his rival Gilberto Simoni on the Colle delle Finestre descent to win the closely contested Giro in 2005. His ability to swoop through the turns so much faster than his competition was stunning, earning him the nickname "Il Falco," or The Falcon. Mr. Yates, who has followed Mr. Savoldelli's career, says he never figured out how Mr. Savoldelli did it: "He wasn't an insane type of bloke."

Mr. Savoldelli agrees, saying he was more calculating than crazy. "The Giro has tight curves and lots of them where, if you know what you're doing, you can clip off an opponent at the right moment," he says. "I was a little bit better at it and I was always very precise. I never went above what I knew I could handle on those curves."

Because the tires on racing bikes are so thin and have so little surface area on the ground, riders say they need as much weight pressing down on the center of the bike as possible. Professional cyclists lean the bike over to the inside of a turn, but keep their body weight upright, pressing down on the outside pedal. At high speeds, braking actually becomes dangerous because it causes the tires to lose traction and wobble. Braking too much also causes heat, which can melt glue on the rims, causing tires to detach. To descend well, experts say, riders need exceptional hand-eye coordination to handle the unpredictable nature of descending without panicking. Mr. Yates calls it "soft focus," or the ability to see the whole road, and all potential obstacles at once, while staying firmly concentrated on technique.

Descending is almost impossible to practice. Because roads in big professional races are completely blocked off, cyclists use the entire road to gain speed and turn, using the maximum amount of space. When training, cyclists can only use half the road, because the other side is reserved for oncoming traffic. "You kind of just have to learn it in races," says Mr. Vaughters, who says having a "descending camp" with blocked roads might be helpful.

Before races, some riders scout the course and take notes. But in some descents -- which can take more than an hour -- there is no way to memorize every switchback and every turn. Mr. Yates says he used to try and predict turns based on the pace motorcycles in front of him -- particularly when their brake lights went on -- and the angle at which they were leaned over.

Andy Hampsten, the only American ever to win the Giro d'Italia, says he learned to descend as a young rider from people like Greg LeMond and legendary Polish coach Eddie Borysewicz. Mr. Borysewicz didn't just teach descending skills, though. He also taught Mr. Hampsten and other juniors how to do the inevitable: crash.


Mr. Hampsten would do tumbling drills where he would jump in the air and learn how to soften his fall with his arm. Mr. Borysewicz showed him how to roll, rather than slide, on the ground while keeping his hands wrapped around his head. (They rarely wore helmets in the mountains back then.) "It was actually was one of the major reasons I could relax about taking risks and overcoming the fear of falling," says Mr. Hampsten.

That training came in handy during the 1988 Giro, when Mr. Hampsten gained time on his rivals going up the Gavia Pass during a snowstorm. With the roads covered in snow and ice, Mr. Hampsten says he descended so much faster than his rivals that he widened his gap on the 25-kilometer descent, securing his historic win. "I just rode as hard as I could. I'm a bike racer, and that day it snowed and I just had to do my best," he says.

Photo: Chris Horner descending; looking ahead, in the drops, fingertips on brakes, inside leg up, outside leg down and weighted. For descending tips see:
http://italiancyclingjournal.blogspot.com/2009/04/4-ways-to-become-better-descender.html

After the Giro we'll get back to "regular programming": everything from A to Z about Italian cycling. Stories, including cycling trip stories, for the Italian Cycling Journal welcome; contact veronaman@gmail.com
Posted by Angelo senza la o at 4:47 PM