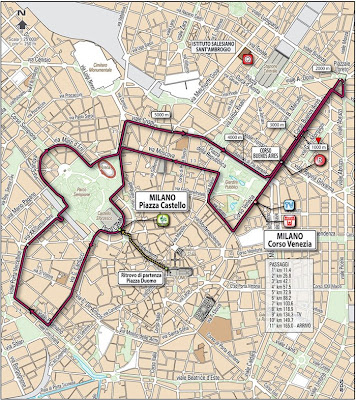 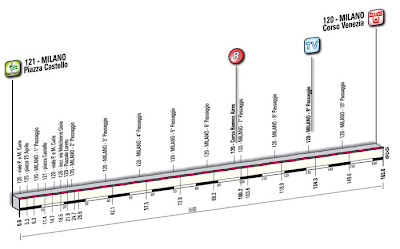 Sunday, 17 May, 2009, Stage 9 official description:
To borrow a phrase from the football world, with this stage, held entirely in the heart of Milan, the Giro d’Italia is very much “at home”. It was here that the race begun a hundred years ago with the 397 km Milan-Bologna stage. The first winner was Dario Beni in 14h06’15s at an average speed of 28.090 km/h. Second was Pesce and third Galetti, although all were credited with the same time. It was 13 May 1909 at 2.53 in the morning when, from the Rondò di Loreto, starter Carlo Cavenaghi, chairman of the Italian Cycling Union, set the 127 courageous pioneers that had lined up on the starting line off on the adventurous first Giro. After Bologna, the Giro continued on to Chieti, Naples, Rome, Florence, Genoa, Turin and Milan again. Barring a few exceptions, Milan has also traditionally been the place where the Giro comes to an end amid scenes of jubilation with the winner and the other cyclists welcomed home by the crowds to equal acclaim. The 1909 Giro also concluded in Milan after eight stages, with Dario Beni again triumphant in the final Turin-Milan stage ahead of Galetti and Ganna. The overall winner of the first Giro was Varese’s Luigi Ganna, 26, of the Atala team with 25 points. He was followed by Galetti on 27 points and Rossignoli on 40. Forty-three cyclists brought the first Giro d’Italia to an end. The points-based table was used for five years before a time-based leaderboard was introduced. Had a time-based system been used, Rossignoli would have won in 89h 48’14s, followed by Galetti 23’34s later and then Ganna (36’54s).

Here follows the report on the finish of the race, taken from the publication that celebrated the 50th anniversary of the Giro d’Italia:
The actual finish took place in Cagnola at 3.25 p.m., opposite the Trattoria Isolino on the Musocco road, and as nobody had envisaged such crowds and confusion, a squadron of Novara Lancers on horseback had to be called to restore order. To protect the riders from the crowd, the galloping light cavalrymen, with their pennons blowing in the wind, accompanied the cyclists over the final kilometre until one of the bewildered animals darted into the group of bikes and sent various cyclists to the ground in a tangle of damaged bicycles and scattered accessories. They got to their feet again covered in cuts and blood. Rather than parading around the Arco della Pace on bicycle it was necessary to transport the competitors to the Arena on emergency vehicles and the winner, covered in dirt and sweat, could have been mistaken for Radames. At the Arena, with the symbolic final sprint, the final signature and the checking of the bicycle marking, they were met with a “belle èpoque” ceremony; flowers, the band, the kisses of women with their parasols, fringes, and Coty scented handkerchiefs, the handshakes, the congratulations, the goodbyes. In its concluding comment, La Gazzetta dello Sport made a historic commitment to Italy and the Italian people: “a glorious event, to repeated each year with growing enthusiasm and love, has been deeply etched in the annals of sport”. (A commitment that has been maintained over time).

The prize-giving ceremony took place at the Dal Verme theatre at a gala evening that included an operatic representation of “A Waltz Dream”. Ganna earned 5325 lire, Galetti 2430 lire, and Rossignoli 2008 lire.

The 81 Giro stage finishes in Milan since 1909 have been packed with stories, emotions and memorable moments. The most successful riders have been Mario Cipollini with 5 successes and Alfredo Binda and Alessandro Petacchi with 3 a piece.

Departure from Piazza del Duomo and then along the very central Via Dante with the imposing presence of Castello Sforzesco in the background. The route through the heart of Milan then takes in Piazzale Loreto, Corso Buenos Aires, Porta Venezia, Piazza Cavour, Via Moscova (going past the current “home” of La Gazzetta dello Sport and the Corriere della Sera), Piazza Castello, Piazza Cadorna, Viale Papiniano, Via Melzi d’Eril alongside the Arena Civica named after Gianni Brera, Piazza 25 Aprile, Piazza della Repubblica and Porta Venezia, where it finishes.

The route is around 16 kilometres in length, all on flat ground obviously, making it ideal for the sprinters, with the overall stage just over 150 km long. The circuit combines Milanese history, landmarks, places, atmospheres and landscapes with events, memories and sites relating to the city’s Giro d’Italia and its magnificent first 100 years.

A remarkable story of love, passion and tradition that remains as strong as ever.

After the Giro we'll get back to "regular programming": everything from A to Z about Italian cycling. Stories, including cycling trip stories, for the Italian Cycling Journal welcome; contact veronaman@gmail.com.
Posted by Angelo senza la o at 11:52 AM