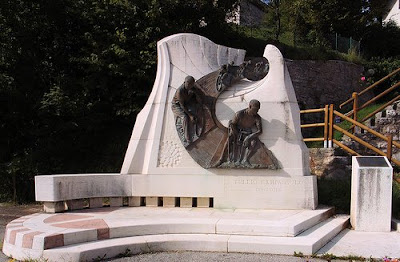 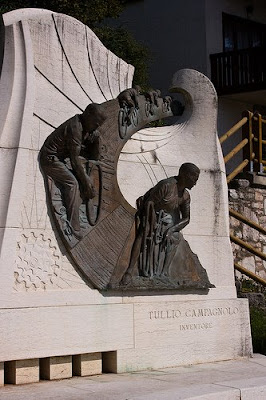 Stage 4 will use the Croce d'Aune climb today. It was during one of Campagnolo's races as an amateur that he confronted a problem which often faced cyclists of that period, removing a wheel in order to change gears (wheels had one gear on each side, one a climbing gear; the wheel would be removed and flipped). On November 11th, 1927, with snow covering the roads of the Croce D'Aune Campagnolo needed to remove his rear wheel to change gears. Because the large wingnuts that held his wheel on had frozen and his hands were too cold to budge them, he was unable to remove his wheel to change gears, and lost his chance at victory that day.
As he struggled to free his wheel, he muttered five words to himself that changed the history of cycling:
"Bisogno cambiá qualcossa de drio!"
Those words ("Something must change in the rear!") and that simple event -- a wheel that couldn't be removed -- started Campagnolo thinking. He went back to his workshop, and emerged with the invention of the quick-release lever (in 1930) and, soon after, an early bicycle derailleur (1933).
Stage 4 details:
http://italiancyclingjournal.blogspot.com/2009/05/stage-4-padua-san-martino-di-castrozza.html
Photos: Tullio Campagnolo memorial at Croce d'Aune

After the Giro we'll get back to "regular programming": everything from A to Z about Italian cycling. Stories, including cycling trip stories, for the Italian Cycling Journal welcome; contact veronaman@gmail.com.
Posted by Angelo senza la o at 4:22 AM