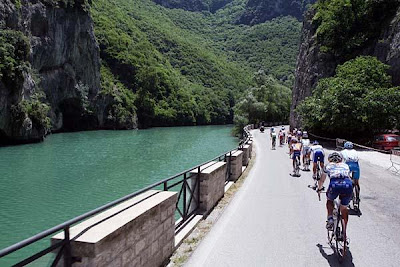 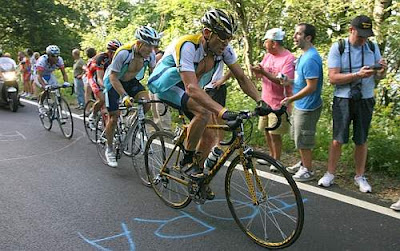 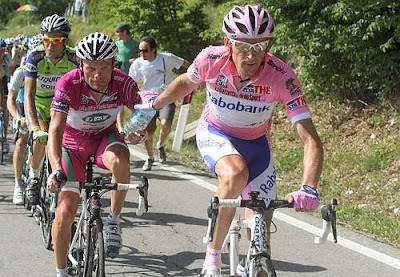 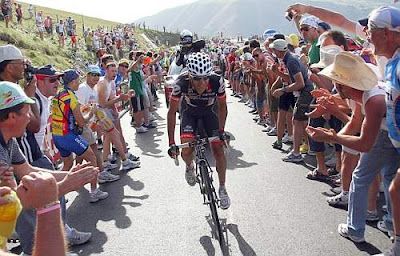 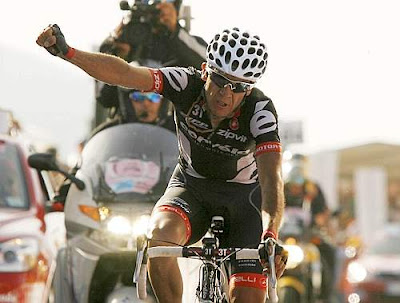 MONTE PETRANO (PU), 25 May 2009 - Carlos Sastre has won the 16th stage of the Giro d’Italia, from Pergola to Monte Petrano, 237 kilometres. The Spaniard from the Cervelo team, 34 years old, king of the Tour de France 2008, conquered the gruelling stage on the mountains in Le Marche by soaring ahead of the other riders on the last climb, which led directly to the finish line on Monte Petrano. At minus 2.5 km, Sastre chased down Yaroslav Popovych, whose sprint lasted 230 kilometres. For Sastre, this is the 7th victory in his career, and his first at the Giro d’Italia, which he is racing for the fourth time. Second was the pink jersey Denis Menchov, at +25. Third was Danilo Di Luca at +26; fourth was Ivan Basso at +29. Fifth was Garzelli at +1:18, followed by Pellizotti and Francesco Masciarelli, who were one minute and 21 seconds back. Leipheimer, third in the ranking this morning, was further back, as well as the rest of the racers.

GENERAL RANKING — Denis Menchov defended his prize. The Russian from Rabobank, 31 years old, now leads the general ranking with 39 seconds on Danilo Di Luca. Sastre rises to third place, 2:19 behind. Fourth is Franco Pellizotti at +3:08; fifth is Ivan Basso at +3:19. “I tried, but Sastre was stronger and Di Luca and Menchov held up well,” Basso said to the RAI microphones directly after the finish. Leipheimer is now sixth at +3:21.

THE DETAILS — A group of riders broke away immediately. First there were 20, then, at 73 kilometres from the finish of a stage with 4 Mountain Gran Prix – Cesane, Nerone, Catria and Petrano – 14 riders remained in the group. These were Dion (AG2R), Popovych (Astana), Bellotti (Barloworld), Sprick (BBox Bouygues Telecom), Jeannesson (Caisse d'Epargne), Gomez (Fuji-Servetto), Cunego (Lampre), Carlstroem (Liquigas), Bosisio (LPR Brakes), Cataldo (Quick Step), Ardila (Rabobank), Scarponi and De Bonis (Diquigiovanni), and Voigt (Saxo Bank). In Moria, a peak of three kilometres with harsh slopes, Scarponi and Cunego drove forward, but were caught up to by Popovych and Bosisio. The Colombian Soler withdrew, and at the foot of Monte Catria the 4 pace setters had about 4 minutes on the pink jersey’s group, comprised of about forty racers. The situation on top of Monte Catria: Cunego, Popovych and Bosisio broke ahead of Scarponi and had about 3 minutes on the pink jersey’s group. Going downhill, Popovych sped ahead and at minus 20 km had 30 seconds on Cunego, 1 minute on Popovych and 4:52 on the peloton. On Monte Petrano, the final climb, right before the end of the race, the scrimmage began in the pink jersey’s group: Basso attacked, but Menchov defended himself well. Sastre and Di Luca made an attempt as well, but the Russian seemed to have a solid lead. The third try was the charm: somewhere between 7 and 6 km from the finish line Sastre managed to take off alone. Basso raced after him; Di Luca and Menchov remained further behind. The four riders managed to reach and overtake Cunego. At minus 3 km, Popovych had 40 seconds on Sastre, 58 on Basso and 1:12 on Menchov and Di Luca. Moments later, Sastre completed his attack and ended up in the lead. This was the prelude to an exciting finish. Leipheimer had a rough day with Armstrong having to pace him up Monte Petrano. Allan Davis said his computer showed more than 5,000 meters of climbing for the day.

TOMORROW — Second and last rest day. The 100th anniversary of the Giro d’Italia – 92nd race – resumes Wednesday with the 17th stage, in Abruzzo: Chieti-Blockhaus, 83 kilometres with a final climb at 1,631 metres.