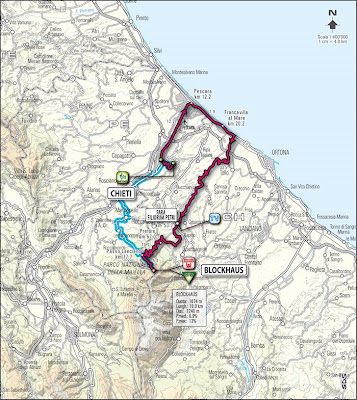 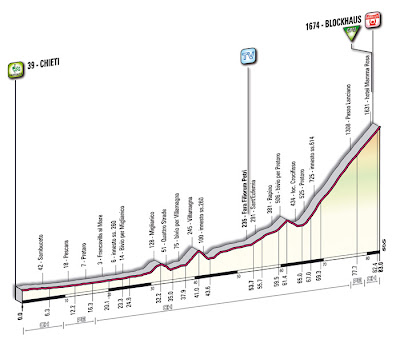 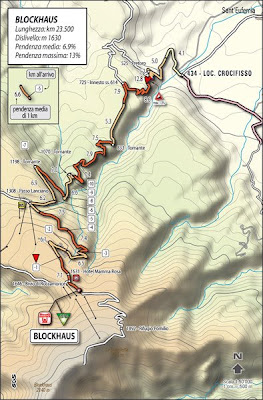 Wednesday, 27 May, 2009, Stage 17 official description:
Following the second and final rest day, the Giro d’Italia comes to Abruzzo, the region recently affected by the tragic earthquake in the province of L’Aquila. The stage gets underway in the ancient town of Chieti, remaining in Abruzzo right the way through to the finishing line in Blockhaus at an altitude of 2064 metres. A short stage that is very demanding towards the end with over 20 kilometres of continuously uphill road.

Chieti also appeared in the first Giro d’Italia in 1909, featuring on the 378 km 2nd stage starting in Bologna. Winner that day was Giovanni Cuniolo, known as “Manina” (“Small hand”) for his habit of occasionally removing a hand from the handlebars to try and increase his speed during sprints, who came in ahead of Ganna and Trousselier. Over the centuries, this elegant town, capital of the Marrucini people - ancient Teate for the Romans - has acquired its current conformation in its airy hill location against the backdrop of the mountains (Maiella and Gran Sasso) and the Adriatic. It is currently regarded as a town of culture and study. It boasts numerous architecturally interesting buildings and cultural events, and its production and commercial activities take place in Chieti Scalo below.

Over the years the Giro d’Italia has made regular appearances in Chieti. Aside from Cuniolo, the winners’ rostrum has included names of the calibre of Alavoine, Girardengo (twice), Binda, Ortelli, Rik Van Looy, Ugo Colombo, the Swiss Bruno Wolfer and, in 2002, Denis Lunghi.

From Chieti, the riders then head towards Pescara, Francavilla al Mare, Villamagna, Fara Filiorum Petri, and Rapino, striking locations watched over by the Maiella, the province of Chieti’s distinctive mountain that dominates the background. From Pretoro, a village known as the eastern gateway to Majella National Park, a mountain massif with an extraordinary array of flora and fauna, the road begins to head uphill for over 22 km, with a uniform and considerable incline of around 7%. It is then through the Lanciano Pass (1308 m) where, in 2006, Ivan Basso secured the stage and the pink jersey that he would wear until the end of the tour, the area known as Hotel Mamma Rosa, and onto the finishing line at an altitude of 2064 metres. It is practically the same finishing point where Eddy Merckx enjoyed his first Giro d’Italia stage win in 1967 ahead of Italo Zilioli, who would later become a great friend of the Belgian legend. The following year Franco Bitossi took the plaudits following the disqualification of winner Bodrero. Blockhaus also featured on the 1972 Giro with a short morning half-stage just 48 km in length beginning in Francavilla al Mare. On this occasion, the little Spaniard Josè Manuel Fuente surpassed himself to break away and win the stage at 1700 m, ahead of fellow Spaniard Lasa and Gianni Motta. The extraordinary performance by the grimpeur from Oviedo saw many sprinters – including several big names – disqualified for finishing outside the maximum time limit having badly miscalculated their rides.

In 1984 the Numana-Block Haus stage finished at an altitude of 1600 metres. Victory went to a young Moreno Argentin who came in 2” ahead of Moser, winner of that year’s Giro in his incredible year of hour records.

Block Haus takes its name from the local military fortifications built by the Germans on top of pre-existing fortifications dating to the Bourbon age. With the approval of “don” Carlo Travaglini, the local promoter, patron Vincenzo Torriani adopted the name in order to localise the area and give it an identity.

After the Giro we'll get back to "regular programming": everything from A to Z about Italian cycling. Stories, including cycling trip stories, for the Italian Cycling Journal welcome; contact veronaman@gmail.com.
Posted by Angelo senza la o at 10:51 AM