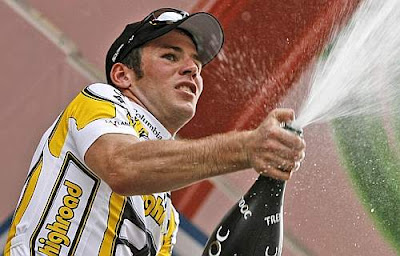 FLORENCE, 22 May 2009 – There was a fight, as predicted. The “goal” which Cavendish centred to close his game with Petacchi at 3-2 took shape among controversy, just as in Milan and then in Arenzano. However, the Briton who now lives in Tuscany crossed the finish line without noticing the brawl exploding behind him. It didn’t involve him, simply because he’s faster than the others.

FIRED UP — One hundred metres after the finish line, Alessandro Petacchi tore off his helmet, caught his breath and vented his pent up anger. He seemed like Bartali, the legend to whom this stage was dedicated. "Farrar? He was complaining about something and I told him to go to hell. He’s always sitting down; I don’t know how he can manage the sprints." He is clearly referring to the clash in Arenzano, when the Italian publicly complained about the Garmin racer’s bad conduct. Farrar replies, "The team did a great job for me, but Petacchi ruined everything by cutting me off. I didn’t even touch him the other day, but he told the press that I acted badly. I don’t know what he wants from me". They are irreconcilable.

GOODBYE MARK — Continuously driven ahead by a team that has won 6 stages out of 13, Cavendish takes stock. "I think I have the best lead out man in the world in Mark Renshaw, and all I have to do is finish it off. The whole of my town is here to watch, I wanted to win. I'm happy," said the 24-year old who has gained 11 victories in 2009, “but I’m also a bit tired." And, in fact, in the evening Columbia-High Road announced the withdrawal of their sprinter.

CARPE DIEM — The rest of the group, with the exception of Scarselli, Ignatiev and Schroder, who broke away in a sprint, had a relatively calm race. Tomorrow, however, expect a battle on the finish in San Luca, where one of the top riders won the Giro dell’Emilia in 2008. "I know that finish really well." This is the voice of Danilo Di Luca. “It is harder than the Mur de Huy in the Flèche Wallonne. Something is going to happen because we’re looking forward to the time bonuses". Leipheimer, "My goal is not to lose any more time to Di Luca". Menchov, "I know they will attack, but I’m not afraid.” Basso, "I have to concentrate only on pedalling hard, not on strategies. Franco and I are two intelligent guys. The question is not who helps who, but how many minutes we are behind the pink jersey. For us to have a chance to win the Giro, we have to help each other.”

After the Giro we'll get back to "regular programming": everything from A to Z about Italian cycling. Stories, including cycling trip stories, for the Italian Cycling Journal welcome; contact veronaman@gmail.com.
Posted by Angelo senza la o at 5:21 AM