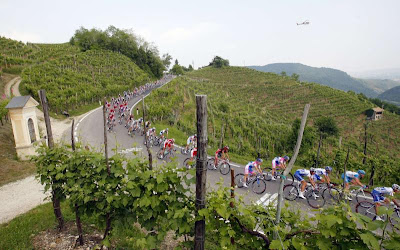 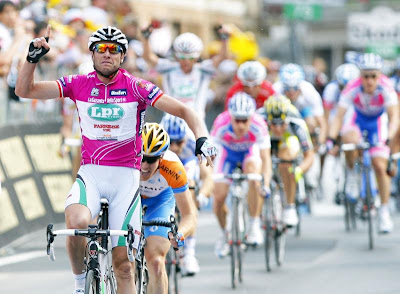 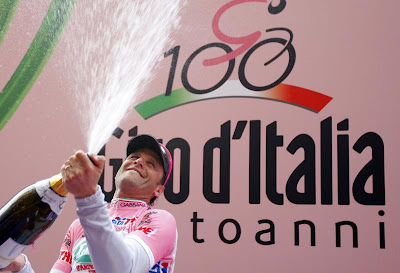 VALDOBBIADENE, 11 May 2009 - Alessandro Petacchi has won the third stage of the Giro d’Italia, 198 kilometres from Grado to Valdobbiadene, and has also conquered the pink jersey. The 35-year-old from La Spezia, who rides for LPR-Farnese, sprinted to win on a slightly uphill finish, providing an encore of yesterday’s win in Trieste, and gaining his ninth win this season (record), 21st stage win at the Giro, and 151st career victory. There was nothing that Bruseghin and Visconti could do, even though they made an attempt in the final stretch. Second across the finish line was the American Farrar, 3rd was Gavazzi, 4th was Cataldo, and 5th was Cunego.


PLAY BY PLAY — The route was crowded with spectators, even though the race is only at its 3rd stage and Monday is a work day. After 6 km Palumbo (Acqua e Sapone), Krivtsov (Ag2r), Facci (Quick Step), Ignatiev (Katusha) and Schroder (Milram) attacked, gaining a 7-second advantage. At the 140th km, US riders from the Garmin team Zabriskie and Vande Velde fell on the downhill run towards Pieve di Soligo. Vande Velde, the first pink jersey of the Giro 2008, was forced to withdraw. The group regained contact after 163 kilometres, but ten minutes from the finish line it was broken up by a fall. The riders who fell behind included Mark Cavendish (and Menchov, among the top riders), who lost the symbol of leadership as a result.

TOMORROW — The 100th anniversary of the Giro d’Italia – 92nd race – continues tomorrow with the fourth stage: Padua-San Martino di Castrozza, 162 kilometres, starting around 1:00 pm and finishing around 5:15 pm. There is a Mountain Gran Prix in Croce d’Aune (8.5 km at eight percent, and peaks of 12%), then the first uphill finish of the race: the final climb is almost 14 kilometres long, with an average gradient of 5.5% and a maximum gradient of 10%.

Six years later, enjoying the pink jersey is even better. It was 17 May 2003. After six consecutive wins, Alessandro Petacchi wore the symbol of leadership for the last time in Avezzano before passing it to Garzelli. From then on, the Giro d’Italia had granted the sprinter from La Spezia other victories – the last being yesterday’s win in Trieste – but not the sweetest color.
QUIET EVERYONE — Cavendish didn’t even make it: he was blocked by a fall that broke the group in two. The others, from Farrar to Gavazzi up to Visconti and Bruseghin, bowed their heads to the man in the best shape over this terrain. "This is a reward for the team’s work. This jersey belongs to all of LPR and the great Petacchi,” said the 35-year-old Italian. “I shushed everyone because there’s always someone who finds excuses for why their rivals win. Here I demonstrated that I was the strongest". Strong enough to knock down, together with Farrar, two photographers in place at the finish line. Fortunately, this was resolved without any consequences.
BASSO UP — After his near miss in Trieste, Ivan Basso did not take any risks, driving his team on from the first passage to the final circuit. This is a good sign in view of the Dolomites, which, from tomorrow could provide the first shake up in the general ranking (Vande Velde withdrew, and today Menchov lost precious seconds on the field). Everyone is watching Simoni and Di Luca, who in Venice did not hide unrealistic ambitions for the uphill finish in San Martino di Castrozza. "I don’t think that anything important will happen,” clarified Petacchi, who is Di Luca’s team-mate. “The Giro is long, and wasting energy on the fourth day could be a mistake. The top riders will control themselves". True, but the looming shadow of that time trial of almost 62 kilometres would suggest a different script...
FANS AND PROSECCO — It was Bruseghin and Pozzato’s stage, and it was turning out to be Visconti’s stage. Pippo made an attempt just before Ale-Jet started his turbo engines and became impossible to catch. "I broke two spokes; I lost power, even though beating this Petacchi would have been difficult," said "Bruse", at – 3. "I’d like to thank all these people who are cheering for me. You could say that the region defining my fans is the region of Prosecco. This was the only point where I could have made a difference. Unfortunately, it didn’t go well. Today has been the most moving day for me since I started racing". An excellent Visconti saw his dream go up in smoke at 200 metres. "It’s better to try than sprint to a fifth or sixth place". The best racers included Cunego, fifth, who is showing significant growth. Ready for the first day in the trenches.
ULTIMATUM TO ASTANA — Lance Armstrong finished the stage without any problems. The difficulties remain those linked to Astana’s financial situation, as the team risks losing its ProTour licence. The UCI has sent an ultimatum in the form of a letter. If the team does not demonstrate that it has solved its financial problems by 31 May, it will be suspended. This means that the Giro d'Italia is not at risk, and this was confirmed by Johan Bruyneel. However, for Armstrong, and especially for Contador, the Tour de France is an unknown.

After the Giro we'll get back to "regular programming": everything from A to Z about Italian cycling. Stories, including cycling trip stories, for the Italian Cycling Journal welcome; contact veronaman@gmail.com
Posted by Angelo senza la o at 12:30 PM