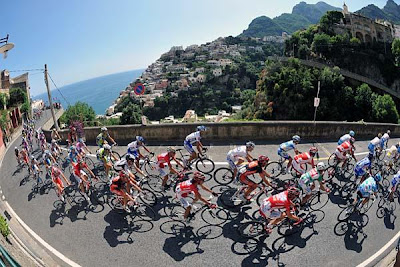 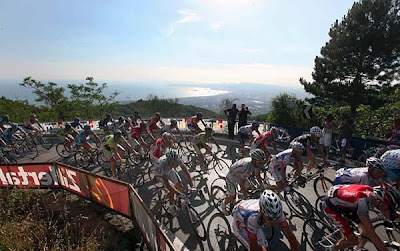 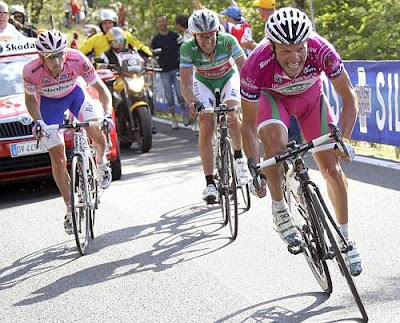 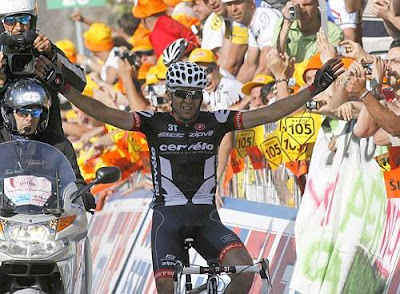 ERCOLANO (Naples), 29 May 2009 - Carlos Sastre has won the 19th stage of the Giro d’Italia, from Avellino to the last uphill finish of the race, on Mt. Vesuvius. The 34-year old Spanish racer for Cervelo, the kind of the Tour de France 2008, gained a lead with a decisive attack slightly less than 5 km from the finish line, when he left Ivan Baso behind, thus providing an encore of Monday’s victory on Monte Petrano, which was also an uphill finish. Sastre, counting his eighth victory in his 13 years as a pro, crossed the finish line with 21 seconds on Franco Pellizotti. Third, at +30, was Danilo Di Luca, right ahead of Denis Menchov. The Italian thus gained 8 seconds in time bonus for third place. Fifth was Basso at +33. Sixth, at +53 was Leipheimer. Then came all the rest.

GENERAL RANKING — Denis Menchov, who personally fought off all the attacks without showing any signs of fading, still has an 18 second lead on Danilo Di Luca. Third is Pellizotti at +1:39. Fourth is Sastre, who sped ahead of Ivan Basso.


THE DETAILS — 171 racers took off, and after 16 kilometres, Facci and Krivtsov broke away. The first hour flew by at an average speed of 49.8 km/h. The speed naturally slowed when the racers had to face the beautiful but torturous roads of the Almafi coast. Menchov had a puncture, Armstrong fell, but the Russian and the American started up again with no problems. There were no great breakaways: the group of sprinters was caught right at the foot of Mt. Vesuvius. Agnoli, a team-mate of Basso and Pellizotti, attempted the first attack. Behind him was Tiralongo, of Lampre-NGC. Shortly after the -9 km banner, here came the scouts Basso and Ochoa with Garzelli. Just before eight kilometres from the finish line Di Luca made his first attack. Menchov immediately fought back. At minus 7.5 km, Basso moved forward to remain alone in the lead: Sastre joined him and the two had 12 seconds on Gilberto Simoni and about twenty seconds on the group of the top riders. At minus 6 km Garzelli, from behind, spurted forward in pursuit. At minus 5 km Basso and Sastre passed by with 35 seconds on Simoni and Arroyo and about 50 seconds on the group of top riders, then Sastre remained alone in the lead. Di Luca attempted another burst of speed at minus 4.5 from the finish line, once he had passed Simoni and Arroyo. Menchov and Pellizotti were in pursuit. At that point there were two races: one for the final victory and one for the pink jersey. Pellizotti tried several attacks: at minus 2 km was his most decisive, and his team-mate Basso was waiting for him ahead. Behind them, Di Luca made another attempt to leave Menchov behind, but in vain. And Carlos Sastre went on to win, with Basso being pulled back by Pellizotti, Di Luca and Menchov.

TOMORROW — The 100th anniversary of the Giro d’Italia – 92nd race – continues with the 20th, penultimate stage: from Naples (the Giro returns to the capital of the region of Campania after 13 years: in 1996 Mario Cipollini sped to a win in via Caracciolo) to Anagni, 203 kilometres. There are no great ups and downs, but it has a steady, slight uphill finish.

After the Giro we'll get back to "regular programming": everything from A to Z about Italian cycling. Stories, including cycling trip stories, for the Italian Cycling Journal welcome; contact veronaman@gmail.com.
Posted by Angelo senza la o at 12:26 PM