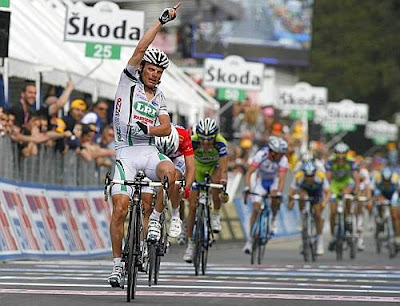 SAN MARTINO DI CASTROZZA (TN), 12 May 2009 - Danilo Di Luca has won the fourth stage of the Giro d’Italia, 162 kilometres from Padua to San Martino di Castrozza. The LPR-Farnese rider, from Abruzzo, 33 years old, beat Stefano Garzelli and Franco Pellizotti at the final sprint. Fourth was Soler, then Simoni, Leipheimer, Lövkvist and Ivan Basso. Di Luca – winner of the Giro d’Italia 2007 – has gained his second victory this season, and the 47th in his career. He had not won a stage at the Giro since Briançon in 2007. The new pink jersey is (Sweden/Columbia-High Road), who has 2 seconds on Danilo Di Luca.
DI LUCA DAY — “This was my moment. I was very confident I could win here. The team has worked very hard to get me to the front after the puncture” – commented Di Luca, whose time bonus takes him to within 2 seconds of the pink jersey. “I made my attack at 350 metres because Soler had a fair lead. Garzelli came with me, someone who is very dangerous on these types of finishes, but at 200 metres I took a slight lead and managed to hold onto it. This win is dedicated to the region of Abruzzo, and that’s why I was pointing at the writing on my vest. Tomorrow? The Alpe di Siusi is a serious climb and strategies will fly out the window. Those who don’t have the legs anymore at 9 km from the finish line will fall back.”
ARMSTRONG — “I’m not down, it was just the first test and I wasn’t too far away from the leaders”, assured the Texan, who only fell away in the final kilometre. However, nobody from Basso to Di Luca, and Bruseghin to Diquigiovanni-Androni, believes he is about to throw in the towel. “He wasn’t far behind, he looked in pretty good form to me. Let’s see how he does tomorrow", was the widely shared opinion of Michele Scarponi. The Texan will probably be surrounded by a group on the 25 km uphill climb to Alpe di Siusi. Perhaps coloured yellow and green. “Today we showed what it means to work as a team”, remarked Franco Pellizotti, who came third thanks to the work carried out alongside Ivan Basso. “Ivan and I will both have a major say tomorrow.”

THE DETAILS — At km 11, the Spanish rider Perez Sanchez fell and had to withdraw. A group took off sprinting – Spanish rider Martinez (Xacobeo-Galicia), the Italians Bellotti (Barloworld), Viganò (Fuji-Servetto) and De Bonis (Diquigiovanni), who is the better ranked at 2:28 from Petacchi, the British rider Stannard (ISD) and the German Voigt (Saxo Bank). There were only three remaining to attack the Croce d’Aune climb: Bellotti, De Bonis and Voigt, while behind them a fall involved several riders, including Da Dalto, who seemed to be the worst injured, but managed to get up. The pink jersey, Petacchi, shot to the head of the group before breaking away. In the final climb, Di Luca got a puncture and passed with about 20 seconds’ delay. At the start of the final ascent (13.7 km, average gradient 5.5%, maximum 10%) De Bonis gave up and Bellotti and Voigt remained in the lead. The group of top riders was about 2 minutes behind, Petacchi at over 8 minutes.

At minus 8 minutes, only Voigt remained, but the group caught up with him slightly after -3 minutes. Soler made a fruitless attempt in the final stretch, before the top riders took off in a sprint. Armstrong lost 15 seconds in the final stretch, "Legs weren't bad and made it almost the whole way. Came off a little at the top. Not bad for 1st big climb in...".

SWEDE IN PINK — The pink jersey, meanwhile, is currently in the possession of another High Road rider, Thomas Lövkvist, and here, just as with the stage victories by the Bordonali team, it is now three out of four pink jerseys for the High Road team, the only exception being Petacchi’s short stint as leader. “I feel like I’m dreaming but in fact it’s all real,” remarked the Swede, who won the 2009 Montepaschi Strade Bianche. “Cavendish? He lost the jersey yesterday following the fall, and the group could have waited for him.”

TOMORROW — The 100th anniversary Giro d’Italia – 92nd race – continues tomorrow with the fifth stage: 125 kilometres from San Martino di Castrozza to Alpe di Siusi. The start is at 1:45 pm, and the finish is expected around 5:15 pm. Right at the start looms the Passo Rolle, while the finish is the second uphill finish of the race: Alpe di Siusi is 1844 metres high, 25 kilometres long, with an average gradient of 6% (maximum of 11%).