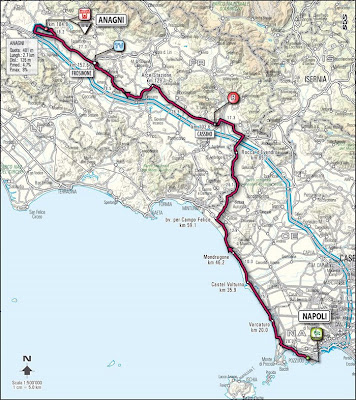 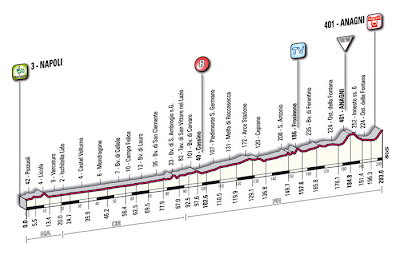 Saturday, 30 May, 2009, Stage 20 official description:
Final roll-call for the sprinters in the penultimate stage of the Giro d’Italia, from Naples to Anagni, in the province of Frosinone.

Naples, with all that this extraordinary city has represented and still represents in terms of the history, culture, monuments, traditions, landscapes, environment and lifestyle of its extrovert population, unique and international, welcomes back the Giro d’Italia having been a stage finish in the first ‘corsa rosa’. On that occasion it was the 3rd stage, a 242-km route beginning in Chieti. A 'short' stage with respect to the customs of the time, with victory going to Giovanni Rossignoli. In subsequent years, stages concluding in Naples were won by: Albini, Belloni, Aymo, Girardengo, Zanaga, Belloni again, Girardengo, Binda, Piemontesi, Belloni for a third time in ’29, Di Paco, Mara, Guerra, Loncke, Guerra, Di Paco again, Olmo, and Guerra for a third time, just like Di Paco, in 1938. In 1940 it was the turn of Servadei, and he was emulated by Ricci in ’45, Coppi in ’47, Logli in ’48, Biagioni in ’49, Brasola in ’50. Casola in ’51, Van Steenbergen in ’52, Milano in ’53, Van Steenbergen again in ’54, Zucconelli in ’55, Vito Favero in ’57, and Poblet in ’59. In 1963 the Giro begun in Naples with the eve and the first part of the race dominated by controversy surrounding Bruno Mealli and Marino Fontana, with both men wearing the champion of Italy vest. The power struggle between the federation as it was and the professional movement was extremely intense, as events at the Giro proved.

Basso won here in ’66, Guido Reybrouck did likewise in the final stage of the ’68 Giro, the first of Merckx’ five titles, Basso again in ’69, and another great sprinter, Cipollini, in 1995: this is a summary of the Giro’s relationship with Naples – which boasts a long history of classic races held at the Arenaccia, such as the Giro di Campania and the Roma-Napoli-Roma – where the sport is enthusiastically supported by a small, but highly knowledgeable group of fans that adore cycling and its history.

The route is practically flat, leaving from Pozzuoli and heading into the province of Caserta via Castel Volturno, Mondragone – known for its delicious mozzarella - and Campo Felice, and then into the region of Lazio and the province of Frosinone. Cassino, with its history and imposing Benedictine abbey that dominates from above, was founded by St. Benedict of Nursia in 529 and rebuilt after being destroyed during the Second World War. Ceprano and then Frosinone, administrative capital of the Ciociaria region, are the other main towns that mark the route towards Anagni, which hosts the 'corsa rosa’ for the first time this year. There is a gentle climb from the bottom of the valley to the built-up area where the finishing line is located, although before crossing this, competitors will first have to complete the final circuit.

Anagni is situated on a spur of the Ernici hills that loom over the Sacco valley and boasts an ancient noble tradition that is also evidenced by the number, nature and architectural value of the historic and religious buildings found here. These include the Cathedral and the adjoining museum with its precious hangings and priceless sacred objects, the palace of Pope Boniface VIII, Casa Barnekow, the best known of the numerous medieval and renaissance residences in Anagni, and other pieces of heritage that conserve the medieval imprint of the town in the urban fabric.

Anagni is also known as the “city of the Popes”, having been the birthplace of numerous Popes and for being a kind of "papal capital". Its fame, also literary in nature, is also due to an episode known as the "outrage of Anagni". It was 1303 and the Church was embroiled in a struggle with the sovereigns of various nations over its temporal power when emissaries of the King of France, Philip IV, also known as Philip the Fair, led by Sciarra Colonna, arrived in Anagni and threatened to take Pope Boniface VIII, who lived there, as hostage. According to legend, the Pope was slapped by the emissaries, hence the other epithet by which the episode is known by, “the slap of Anagni”.The excommunication of Pope Alexander III against Barbarossa began in the Cathedral of Anagni.

The wide array of culinary delicacies and wines in the Anagni area is both rich and of the utmost quality.

After the Giro we'll get back to "regular programming": everything from A to Z about Italian cycling. Stories, including cycling trip stories, for the Italian Cycling Journal welcome; contact veronaman@gmail.com.
Posted by Angelo senza la o at 6:50 PM