A Color Commentary on the Giro d’Italia by Bill Strickland.
courtesy http://www.bicycling.com/

Being such a keen student of the traditions and history of cycling, I knew that the Giro d’Italia for some reason calls its yellow jersey the “maglia rosa.” This little-known fact, of course, explains why Lance Armstrong never competed in this three-week Grand Tour during his prime years and also, now that’s he’s staged his comeback, why he’s refusing to win it: Instead of the cool-sounding “Mellow Johnny’s,” his Austin bike shop would have been stuck with the unfortunate name of “Maggy Rose’s.”

But now that I’m here in Italy covering the Giro in person, I’m using my reporting skills to penetrate all the cultural misunderstandings I’ve been burdened with as an American cyclist. I’ve always known that there’s no way to completely and accurately comprehend the heart and soul of the Italy’s cycling traditions without being here, but the breadth of my new understanding is startling. For instance, I’ve discerned that the Giro’s maillot jaune isn’t even yellow.

Only in Italy would this be a good idea. The rest of the world isn’t stylish enough to pull off pink as anything but an accent; employed as the central hue of our existence, pink would overpower our puny sense of fashion and wear us in the worst way rather than being worn. Italians, however, can make anything magic. In Venice for the Stage 1 Team Time Trial, from a specially reserved viewing spot for the press that allowed us intimate access to both the start and finish, I couldn’t help but notice, watching the greatest bike riders in the world fly past in what I consider to be sport’s most impressive display of tightly synchronized teamwork and daring, that outside the course barrier there was a spindly Italian man with a Joe Dirt mullet, a Tom Selleck mustache and an Ashton Kucher trucker hat walking by, trailing a short, obese, crabby wife and a grimy, crying child. He brought the whole look together with Dolce & Gabbana shoes.

I wanted to weep for the simple knowledge that we humans, even if it’s only in this one country, can conjure such beauty.

Likewise, with the whole pink yellow jersey thing, it’s not so much the color itself that anoints its adherents with elegance and flair, but how they so effortlessly stitch it into their everyday lives.

There are the homages one would expect, the elements that citizens of other countries might come up with, such as: 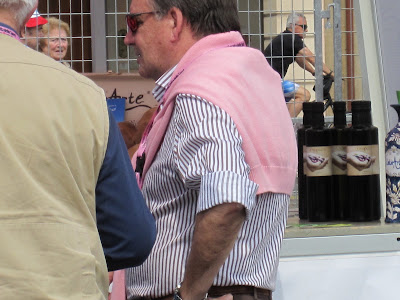 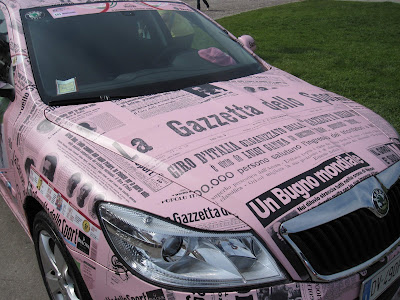 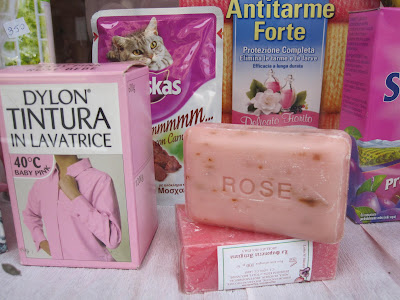 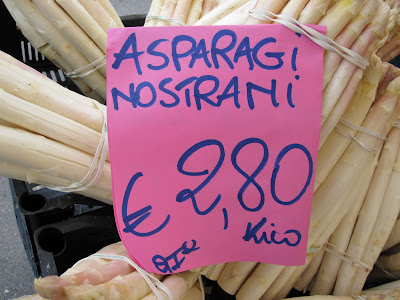 I know what you’re thinking: Why can’t I buy asparagus at the Tour of California? Though I’ve learned a lot already here at the Giro, I don’t have any easy answers for you, other than to guess that cycling is still a niche sport in the United States, and our country is not shaped like a boot. Until our mulleted citizens begin wearing $500 shoes, we’ll never have a truly world-class Grand Tour of our own.

After the Giro we'll get back to "regular programming": everything from A to Z about Italian cycling. Stories, including cycling trip stories, for the Italian Cycling Journal welcome; contact veronaman@gmail.com.
Posted by Angelo senza la o at 5:53 AM